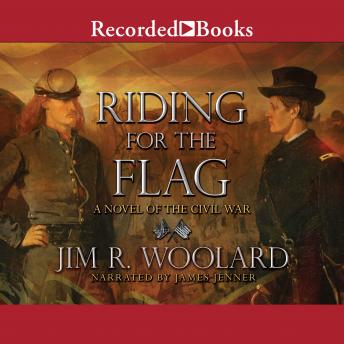 Riding for the Flag

An epic story of a nation--and a family--divided by fate, love, loyalty, and war. . . America, 1861. Battle lines have been drawn between the North and the South, pitting state against state--and brother against brother. For the three young sons of Ohio State Senator Clay Bell, the Civil War would change not only their lives, but the destinies of future generations. Jacob Bell, the eldest, defies his father's wishes to run the family law practice and enlists in Ohio's Volunteer Calvary, a decision that wins him the love of an officer's daughter--and the hatred of a dangerous childhood rival. Judah Bell, the middle son, avenges a brutal Union attack on his uncle's horse farm in Kentucky by joining legendary Lexington Rifles--even if puts a half-breed Cherokee girl and his own family honor at risk. Jarrod Bell, the youngest, lands a job as a cub reporter for the Cincinnati Times-Ledger, determined to learn the truth behind his brother's seeming betrayal--even if it leads him into the bloodiest of battles. Filled with intense human drama, explosive passion, and stunning historic detail, relive America's deadliest war through the stories of the brave men and women who lived it.

This title is due for release on January 22, 2016
We'll send you an email as soon as it is available!