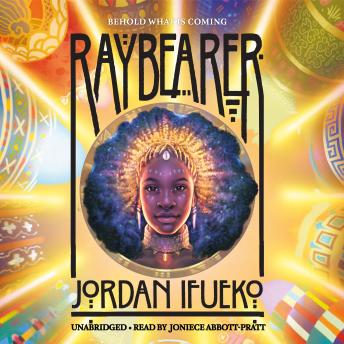 #1 of The Raybearer Series

Nothing is more important than loyalty. But what if you’ve sworn to protect the one you were born to destroy?

Tarisai has always longed for the warmth of a family. She was raised in isolation by a mysterious, often absent mother known only as the Lady. The Lady sends her to the capital of the global empire of Aritsar to compete with other children to be chosen as one of the Crown Prince’s Council of Eleven. If she’s picked, she’ll be joined with the other Council members through the Ray, a bond deeper than blood. That closeness is irresistible to Tarisai, who has always wanted to belong somewhere. But the Lady has other ideas, including a magical wish that Tarisai is compelled to obey: kill the Crown Prince once she gains his trust. Tarisai won’t stand by and become someone’s pawn—but is she strong enough to choose a different path for herself?

With extraordinary world-building and breathtaking prose, Raybearer is the story of loyalty, fate, and the lengths we’re willing to go for the ones we love.

I'm so glad I heard this book instead of reading it. I would not have been able to imagine the rythmes and the way those words rolls off the tongue, I am not familiar enough with the stories and sources where this book is from. It is magic in a wholely different form. As for the story itself... it is of a girl coming of age in more ways than one. Starved of love, she somehow finds a love for her whole world, even the cruel parts. Anger and understanding and a fight in her soul to be a part of something greater than herself because she loves it. A family. A kingdom. A whole world. We see a world that tries to do it's best by hurting those around themselves, thinking everything is a lesser evil rather than to do what is right because it is harder. I'm so proud of her growth through the book, and I hope that it inspires many people the way it inspired me, and also share in the joy and wonder that is Jordan's imagination. I will be looking forward to many more of her stories.

This was, hands-down, The Best narration I have ever experienced. The book was well-written but honestly, had I read it myself I would have missed so much that that the narrator brought to vivid life with her reading! I feel like I've been on a true journey as the experience was so moving.

This was excellent. I see the use of the Hero's journey done very well. And I like the nuances of black and African culture. Me being a mother of 3 daughters, I understand all the complexities of her mother and the phrase "made of me" for the heroes name. The book does not disappoint.

i liked it allot. it's not the best fantasy i have read. but I enjoyed the story. it was very interesting