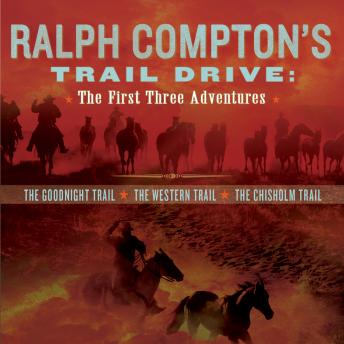 The first three books in the Trail Drive series are now together in a special collection.

Former Texas Rangers Benton McCaleb, Will Elliot, and Brazos Gifford ride with Charles Goodnight as he rounds up thousands of ornery, unbranded cattle for the long drive to Colorado. From the Trinity River brakes to Denver, they'll battle endless miles of flooded rivers, parched desert, and whiskey-crazed Comanches. And come face-to-face with Judge Roy Bean and legendary gunslingers like Clay Allison. For McCaleb and his hard-riding crew, the drive is a fierce struggle against the perils of an untamed land. A fight to the finish where the brave reach glory—or die hard.

In the aftermath of the Civil War, cash-starved Texans turned to the only resource they possessed: longhorn cows. Despite the hazards of trailing longhorns across Indian Territory, this was the only was to access the railroad.

Benton McCaleb and his band of bold-spirited cowboys traveled long and hard to drive thousands of ornery cattle into Wyoming's Sweetwater Valley. They're in the midst of setting up a ranch just north of Cheyenne when a ruthless railroad baron and his hired killers try to force them off the land. Now, with the help of the Shoshoni Indian tribe and a man named Buffalo Bill Cody, McCaleb and his men must vow to stand and fight. Outgunned and outmanned, they will wage the most ferocious battle of their lives—to win the right to call the land their own.

Armed with only a Colt rifle, a Bowie knife, and courage as big as the West, Ten Chisholm—the bold, illegitimate son of frontier scout and plains ambassador Jesse Chisholm and a Cherokee woman—arrives in the heart of Comanche country with a price on his head. His only crime: loving the beautiful daughter of a powerful New Orleans gambler who has promised her to a wealthy man she hates.

Now that Ten has returned to the harsh Texas brakes with a team of battle-toughened cowboys and ex-soldiers—and a vow to return to Priscilla and make her his wife—he must round up wild longhorns, ward off angry Comanches, and survive treacherous outlaw attacks as he crosses the Red River and sets off on a brazen quest to open a new trail to Kansas on the savage frontier.

This title is due for release on May 8, 2012
We'll send you an email as soon as it is available!