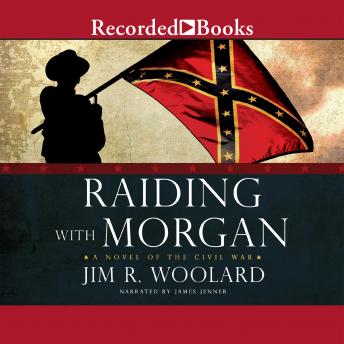 RAIDING WITH MORGAN is an historical Civil War novel set in 1863; it focused of the invasion of Indiana and Ohio by Confederate cavalrymen commanded by General John Hunt Morgan a.k.a. the infamous Morgan' s Raiders. Ty Mattson never knew his father who went off to fight I the Mexican War and never returned; and Ty' s mother died giving birth to Ty. For 17 years, Ty wonders why his father never acknowledges his existence. Ty learns that his father joined Morgan' s Raiders, so Ty decides to follow suit in the hope of meeting his father, which he does. Ty' s father is murdered and Ty is wounded during Morgan' s defeat at Buffington Island; and Ty is carted off the battlefield. He meets and falls in love with Dana Bainbridge, who nurses him back to health. Once he recovers, he is dispatched to Camp Douglas, a Union prison on Lake Michigan. Ty is disheartened in prison from the poor treatment he receives, and his failure to convince Dana to marry him. He summons the courage to carry on and confront his father' s killer. He' s surprised when an unexpected savior frees him from prison and makes it possible for him to pursue his true love, Dana.

This title is due for release on August 1, 2014
We'll send you an email as soon as it is available!