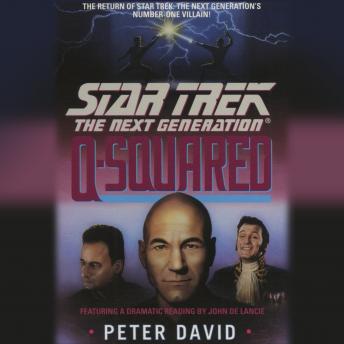 In all of his travels Captain Jean-Luc Picard has never faced an opponent more powerful that Q, a being from another continuum that Picard encountered on his very first mission as Captain of the Starship Enterprise™. In the years since, Q has returned again and again to harass Picard and his crew. Sometimes dangerous, sometimes merely obnoxious, Q has always been mysterious and seemingly all-powerful.
But this time, when Q appears, he comes to Picard for help. Apparently another member of the Q continuum has tapped into an awesome power source that makes this being more powerful than the combined might of the entire Q continuum. This renegade Q is named Trelane -- also known as the Squire of Gothos, who Captain Kirk and his crew first encountered over one hundred years ago. Q explains that, armed with this incredible power, Trelane has become unspeakably dangerous.
Now Picard must get involved in an awesome struggle between super beings. And this time the stakes are not just Picard's ship, or the galaxy, or even the universe -- this time the stakes are all of creation...

This title is due for release on July 1, 1994
We'll send you an email as soon as it is available!