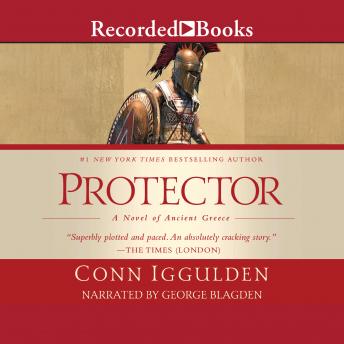 Protector: A Novel of Ancient Greece

The latest epic in this bestselling author’s Athenian series of novels takes the reader on a vivid adventure where Themistocles will risk everything—his honor, his friendships, even his life—to protect his country.

The Battle of Salamis: Persian King Xerxes stands over the smoking ruins of Athens, an army of slaves at his back. Come to destroy, once and for all, everything that the city stands for, he stares pitilessly at the hopelessly
outnumbered Greeks.

Veteran soldier Themistocles cannot push the Persians back by force on land, and so he so does so by stealth, at sea. Over three long days, the greatest naval battle of the ancient world will unfold, a bloody war between the democracy of Athens
and the tyranny of Persia.

The Battle of Plataea: Less than a year later, the Persians return to reconquer the Greeks. Tens of thousands of soldiers on both sides ready themselves for war. For the Spartans, Plataea is chance to avenge their defeat at Thermopylae.

For the people of Athens, threatened on all sides, nothing less than the survival of democracy is at stake. And once again Themistocles, the hero of Salamis, will risk everything—his honor, his friendships, even his life—to protect his country.

This title is due for release on November 2, 2021
We'll send you an email as soon as it is available!