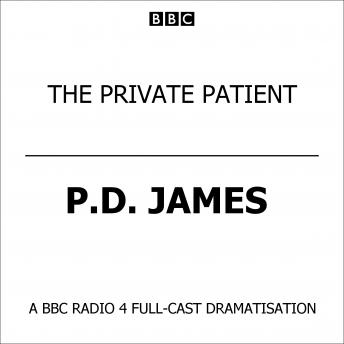 A BBC Radio drama based on P.D. James' bestselling novel, starring Richard Derrington and Deborah McAndrew In the seventeenth century, a witch is burned in a stone circle. Three hundred and fifty years later, an investigative journalist arrives at a nearby clinic to have cosmetic surgery - and a week later, she is dead. Dalgliesh and his team, called in to investigate the murder and later a second equally horrific death, find themselves confronted with problems even more complicated than the question of innocence or guilt. Family secrets, witchcraft, illegitimacy and the connections between past and present all come to the fore in this gripping, fast-paced adaptation of P.D. James' acclaimed novel, starring Richard Derrington as Adam Dalgliesh, Deborah McAndrew as Kate Miskin and with Carolyn Pickles as Emma Lavenham.

This title is due for release on June 1, 2010
We'll send you an email as soon as it is available!