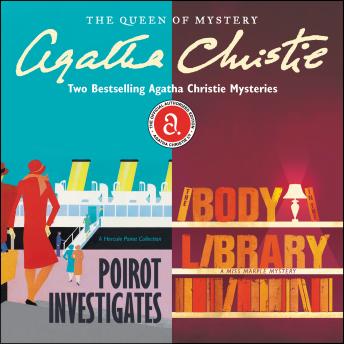 Poirot Investigates & The Body in the Library: Two Bestselling Agatha Christie Novels in One Great Audiobook

Poirot Investigates a host of murders most foul—as well as other dastardly crimes—in this intriguing collection of short stories from the one-and-only Agatha Christie.

What links these fascinating cases? Only the brilliant deductive powers of Hercule Poirot!

The iconic Miss Marple must investigate the case of a girl found dead in Agatha Christie’s classic mystery, The Body in the Library.

It’s seven in the morning. The Bantrys wake to find the body of a young woman in their library. She is wearing an evening dress and heavy makeup, which is now smeared across her cheeks. But who is she? How did she get there? And what is the connection with another dead girl, whose charred remains are later discovered in an abandoned quarry?

The respectable Bantrys invite Miss Marple into their home to investigate. Amid rumors of scandal, she baits a clever trap to catch a ruthless killer.

Poirot Investigates & The Body in the Library: Two Bestselling Agatha Christie Novels in One Great Audiobook