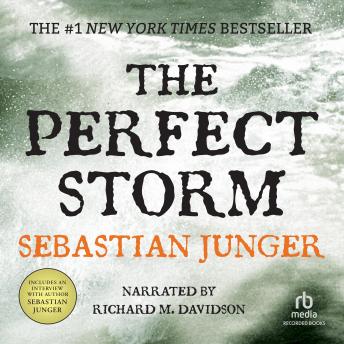 The Perfect Storm: A True Story of Men Against the Sea

Man's struggle against the sea is a theme that has created some of the world's most exciting stories. Now, in the tradition of Moby Dick comes a New York Times best-seller destined to become a modern classic. Written by journalist Sebastian Junger, The Perfect Storm combines an intimate portrait of a small fishing crew with fascinating scientific data about boats and weather systems. In late October, North Atlantic seas are unpredictable. Still, one last good swordfish catch is a chance to start the winter with a fat wallet. As Captain Billy Tyne steers his 72-foot longboat Andrea Gail toward the Grand Banks, growing weather fronts are moving toward the same waters. The Andrea Gail is sailing into the storm of the century, one with 100 mile per hour winds and waves cresting over 110 feet. As each man on the boat faces this ultimate foe, Sebastian Junger gives the account an immediacy that fills The Perfect Storm with suspense and authenticity. Narrator Richard M. Davidson's reading adds further drama to this unforgettable sea adventure. An interview with the author concludes the audiobook.

great narrator. Story is detailed and can be perceived as slightly long, but I think it was interesting for someone who has no knowledge of fishing at all.

This title is due for release on May 16, 2014
We'll send you an email as soon as it is available!