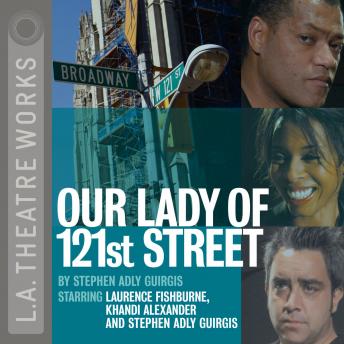 Our Lady of 121st Street

A group of old friends find themselves at Harlem’s Ortiz Funeral Home to mourn the death of a beloved nun from their childhood. As they bounce off of each other with old hurts and the harsh realities of grown-up life, a murder mystery (and a few lives) begins to unravel. Hilarious, raunchy, and ultimately very touching, Stephen Adly Guirgis is a new voice to be celebrated.

Not at all what I expected. This is the audio to a play. Very humorous and entertaining. I actually listened to it twice. Something I seldom do but the dialog was well done. Made me wish I could see the visual. If you are offended by raw language then not for you.

This title is due for release on February 1, 2005
We'll send you an email as soon as it is available!