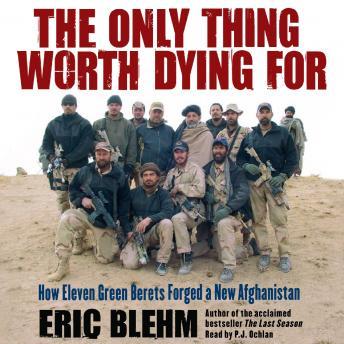 The Only Thing Worth Dying For: How Eleven Green Berets Fought for a New Afghanistan

'The one book you must read if you have any hope of understanding what our fine American soldiers are up against in Afghanistan.” —Former Congressman Charlie Wilson

From the author of the award-winning THE LAST SEASON, the untold story of the U.S. Army Special Forces team that conquered the Taliban against overwhelming odds while protecting Hamid Karzai, viewed at the time as the country’s best hope for a successful, democratically-elected leader.

On a moonless night just weeks after September 11, 2001, a U.S. Special Forces team of Green Berets known as ODA 574 infiltrated the mountains of southern Afghanistan with a seemingly impossible mission: to foment a tribal revolt and force the Taliban to surrender. Armed solely with the equipment they could carry on their backs, shockingly scant intelligence, and their mastery of guerrilla warfare, Captain Jason Amerine and his ten men had no choice but to trust their only ally, a little-known Pashtun statesman named Hamid Karzai. Having returned from exile, Karzai—on the run from the Taliban—was traveling the countryside to raise a militia.

The Only Thing Worth Dying For chronicles the most important mission in the early days of the Global War on Terror, when the men on the ground knew little about the enemy—and their commanders in Washington knew even less. With unprecedented access to surviving members of ODA 574, key war planners, and Karzai himself, award-winning author Eric Blehm cuts through the noise of politicians and high-level military officials to narrate for the first time a story of uncommon bravery and terrible sacrifice, intimately exposing the realities of unconventional warfare and nation-building in Afghanistan that continue to shape the region today.

This title is due for release on May 8, 2012
We'll send you an email as soon as it is available!