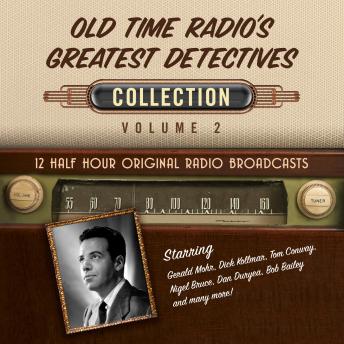 The golden age of radio had incredible detective shows that kept Americans glued to their radio sets. Families gathered around their living room radios to hear their favorite Hollywood stars voicing fiction’s most famous gumshoes. This collection includes Dick Kollmar starring as ‘enemy to those who make him an enemy, friend to those who have no friend’ on Boston Blackie, Bob Bailey playing two different private eyes, George Valentine in Let George Do It and the man with the action-packed expense account in a 5-part adventure of Yours Truly, Johnny Dollar. Tom Conway and Nigel Brice star as Holmes and Watson on The New Adventures of Sherlock Holmes and you’ll hear the premier episodes of Bulldog Drummond and The Man From Homicide. Plus, thrill to Dashiell Hammet’s Sam Spade, Raymond Chandler’s Philip Marlowe and more! The Adventures of Sam Spade, Detective 1/5/51 “The Biddle Riddle Caper”
Boston Blackie 10/22/46 “Inspector Faraday is Shot”
Gang Busters 10/9/48 “The Case of the Incorrigible Killer”
Jeff Regan, Investigator 11/2/49 “The Man in the Black Suit”
Bulldog Drummond 9/26/41 “Audition Show”
Let George Do It 6/7/48 “Have Some Excitement”
Mr. Keen, Tracer of Lost Persons 8/17/51 “The Poison Sandwich Murder Case”
Yours Truly, Johnny Dollar 10/8/56-10/9/56-10/10/56-10/11/56-10/12/56 “The Primrose Matter” (Five, 15 minutes episodes)
The Adventures of Philip Marlowe 9/15/51 “The Sound and the Unsound”
The New Adventures of Sherlock Holmes 3/24/47 “The Adventure of the Scarlet Worm”
The Man From Homicide 6/25/51 “The Muriel Smith Case”

This title is due for release on October 30, 2018
We'll send you an email as soon as it is available!