The Ocean in the Sky 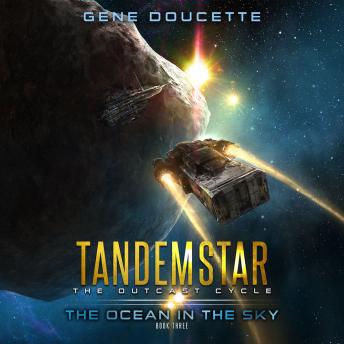 In the heart of the authoritarian country of Wivvol, astronaut Xto Djbbit is about to embark on his first mission off-planet when the exiled High Hat of Chnta comes to him with an unusual request: help smuggle a Septal artifact out of Wivvol. It’s an impossible favor to ask of Xto, but it’s also impossible to refuse; the High Hat of Chnta is also his uncle.

Meanwhile, waiting for Xto in space? His estranged father—who has his own impossible favors—and a mysterious anomaly whose secrets Xto is uniquely positioned to unlock.

On Lys, the space station for the super-wealthy, former Septal Other Dorn Jimbal struggles to understand what Professor Orno Linus learned before his untimely murder. Did Orno truly figure out how to stop the Outcast?

To get to the heart of Linus’s research, Dorn is going to have to work with the one person they absolutely cannot trust: Viselle Daska.

Xto and Dorn will both make discoveries that change the course of all life on the planet. Both will wish they hadn’t.

Ocean in the Sky

This title is due for release on January 25, 2022
We'll send you an email as soon as it is available!