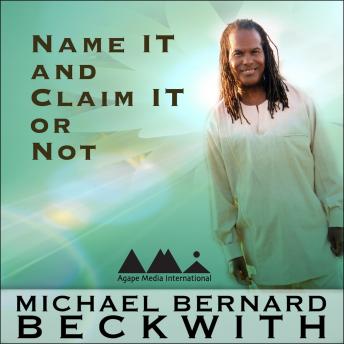 Name It and Claim It or Not

Michael Bernard Beckwith is the founder and spiritual director of Agape International Spiritual Center in Los Angeles, California. He is a featured teacher in the film and book The Secret. In the '70s, he began an inward journey into the teachings of East and West, and today he teaches universal truth principles found in the New Thought-Ancient Wisdom tradition of spirituality. Gifted with a vision of a trans-denominational spiritual community, he speaks to a congregation of more than 9,000 people weekly at Agape. Described in What Is Enlightenment? magazine as a "nonaligned trans-religious progressive," Beckwith shares his powerful conviction of creating the Beloved Community through his participation on international panels with other peacemakers and spiritual leaders, including the Dalai Lama of Tibet, Dr. A.T. Ariyaratne of Sri Lanka and Arun Gandhi. He is co-founder of the Association for Global Thought, an organization dedicated to planetary healing and transformation.

Name It and Claim It or Not

This title is due for release on September 1, 2007
We'll send you an email as soon as it is available!