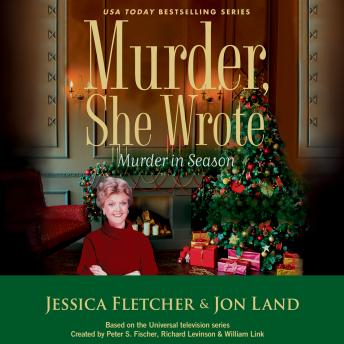 Murder, She Wrote: Murder In Season

With work on the reconstruction of her beloved home almost complete, Jessica Fletcher is in high holiday spirits, spearheading the annual Christmas parade and preparing for her nephew Grady and his family to come to town. The only thing dampening the holiday cheer is the discovery of two sets of bones on Jessica's property: one set ancient, the other only about a year old. It's concluded that they were both placed there during the reconstruction, and Jessica suspects that, despite the centuries between them, the remains might be connected. Soon tabloid reporter Tad Hollenbeck arrives in Cabot Cove to write a story about what he calls "the murder capital of the country." But when Tad himself is murdered, Jessica speculates that his arrival, his death, and the discovery of the bones are all somehow linked.As Jessica digs deeper to find the connection between the bones and Tad's murder, everything seems to come back to a mystery that has long plagued Cabot Cove. If she wants to solve the case, she'll need to delve into her beloved town's dark history, or else this holiday season may be her last...

Murder, She Wrote: Murder In Season

This title is due for release on November 16, 2020
We'll send you an email as soon as it is available!