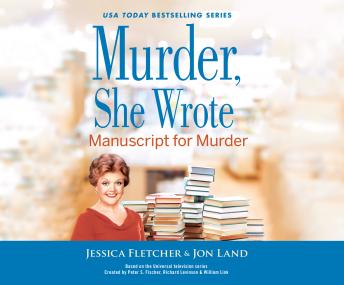 Murder, She Wrote: Manuscript for Murder

Jessica Fletcher has had plenty to worry about over her storied career, both as a bestselling novelist and as a part-time sleuth. But sheÄôs never had any reason to doubt her longtime publisher and trusted friend, Lane Barfield. When mounting evidence of financial malfeasance leads to an FBI investigation of Lane, Jessica canÄôt believe what sheÄôs reading. So when it appears that Barfield has committed suicide, Jessica takes on the task of clearing his name. Sure enough, Jessica turns up several inconsistencies in the case against Barfield, as well as signs he might have been murdered. Jessica knows something is being covered up, but what exactly? At the heart of her investigation is a manuscript Barfield had intended to publish, after all other publishers had turned it down. The problem is the manuscript has disappeared, with all traces of its submission and very existence having been wiped off the books. JessicaÄôs search for answers immerses her in a shadowy underworld and puts her on a dangerous path that leads all the way to the White House. With her own life now in jeopardy, Jessica refuses to back off and sets her sights on uncovering the truth behind what lies in the pages of the mysterious manuscript, as well as the identity of the person who penned it. But will she close the book on the case before the killer can write her obituary?

Murder, She Wrote: Manuscript for Murder

This title is due for release on November 6, 2018
We'll send you an email as soon as it is available!