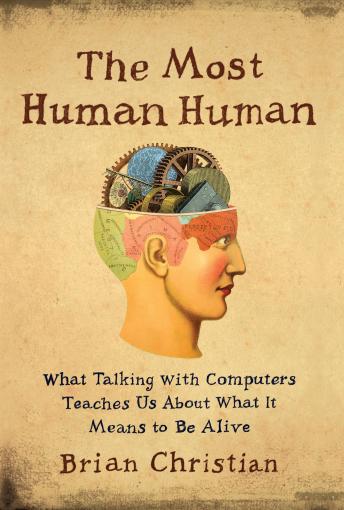 The Most Human Human: What Talking with Computers Teaches Us About What It Means to Be Alive

The Most Human Human is a provocative, exuberant, and profound exploration of the ways in which computers are reshaping our ideas of what it means to be human. Its starting point is the annual Turing Test, which pits artificial intelligence programs against people to determine if computers can “think.”

Named for computer pioneer Alan Turing, the Tur­ing Test convenes a panel of judges who pose questions—ranging anywhere from celebrity gossip to moral conundrums—to hidden contestants in an attempt to discern which is human and which is a computer. The machine that most often fools the panel wins the Most Human Computer Award. But there is also a prize, bizarre and intriguing, for the Most Human Human.

In 2008, the top AI program came short of passing the Turing Test by just one astonishing vote. In 2009, Brian Christian was chosen to participate, and he set out to make sure Homo sapiens would prevail.

The author’s quest to be deemed more human than a com­puter opens a window onto our own nature. Interweaving modern phenomena like customer service “chatbots” and men using programmed dialogue to pick up women in bars with insights from fields as diverse as chess, psychiatry, and the law, Brian Christian examines the philosophical, bio­logical, and moral issues raised by the Turing Test.

One central definition of human has been “a being that could reason.” If computers can reason, what does that mean for the special place we reserve for humanity?

Most Human Human: What Talking with Computers Teaches Us About What It Means to Be Alive

This title is due for release on March 1, 2011
We'll send you an email as soon as it is available!