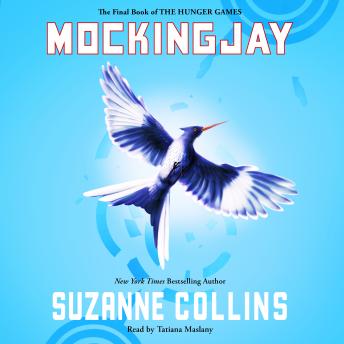 #3 of The Hunger Games

Emmy Award-winning actress Tatiana Maslany narrates a brand-new recording of the second audiobook in the worldwidebestselling trilogy from Suzanne Collins!

Katniss Everdeen, girl on fire, has survived, even though her home has been destroyed. Gale has escaped. Katniss’s family issafe. Peeta has been captured by the Capitol. District 13 really does exist. There are rebels. There are new leaders. A revolutionis unfolding.It is by design that Katniss was rescued from the arena in the cruel and haunting Quarter Quell, and it is by design that shehas long been part of the revolution without knowing it. District 13 has come out of the shadows and is plotting to overthrow theCapitol. Everyone, it seems, has had a hand in the carefully laid plans — except Katniss.The success of the rebellion hinges on Katniss’s willingness to be a pawn, to accept responsibility for countless lives, and tochange the course of the future of Panem. To do this, she must put aside her feelings of anger and distrust. She must become therebels’ Mockingjay — no matter what the personal cost.

Brilliant end to a great trilogy of books

I loved all the books. This narrator is great at building the suspense!

Fantastic book and end to the series. This narrator is seriously killer!

I love this series.

This is one of the best book series obleish and to

I loved this book.

Great book, reader is entertaining as well. My only complaint is every time she says against she says it wrong

amazing end to the series

loved how Tatiana read the book

Tatiana is an amazing narrator, loved her for this series

Great book, loved the narrator. Had to stop a few times in the book because it just got too emotional.

My students and I have enjoyed this book and narration. A powerful reading of an suspenseful story.

This is my favorite of the trilogy. But all three books are some of the best writing I've ever read.

This title is due for release on June 17, 2019
We'll send you an email as soon as it is available!