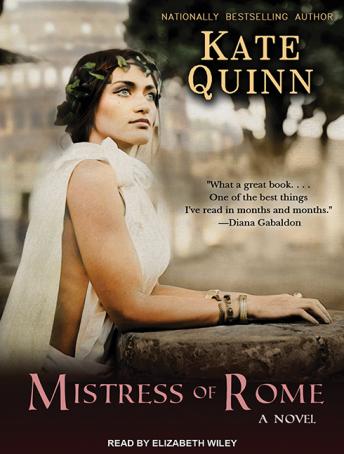 #1 of Empress of Rome

Thea is a slave girl from Judaea, passionate, musical, and guarded. Purchased as a toy for the spiteful heiress Lepida Pollia, Thea will become her mistress's rival for the love of Arius the Barbarian, Rome's newest and most savage gladiator. His love brings Thea the first happiness of her life, but that is quickly ended when a jealous Lepida tears them apart.

As Lepida goes on to wreak havoc in the life of a new husband and his family, Thea remakes herself as a polished singer for Rome's aristocrats. Unwittingly, she attracts another admirer in the charismatic Emperor of Rome. But Domitian's games have a darker side, and Thea finds herself fighting for both soul and sanity. Many have tried to destroy the Emperor: a vengeful gladiator, an upright senator, a tormented soldier, a Vestal Virgin. But in the end, the life of the brilliant and paranoid Domitian lies in the hands of one woman: the Emperor's mistress.

This title is due for release on February 10, 2015
We'll send you an email as soon as it is available!