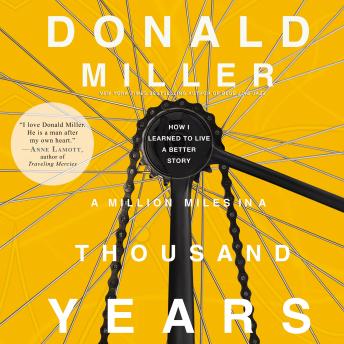 A Million Miles in a Thousand Years: What I Learned While Editing My Life

After the publication of his wildly successful memoir, Blue Like Jazz, Donald Miller's life began to stall. During what should have been the height of his success, he found himself avoiding responsibility and even questioning the meaning of life. But when two producers proposed turning his memoir into a movie, Miller found himself launched into a new story filled with risk, possibility, beauty, and meaning.

A Million Miles in a Thousand Years chronicles Miller's rare opportunity to edit his life into a great story and to reinvent himself so nobody shrugs their shoulders when the credits roll. When his producers begin fictionalizing Don's life for the film--changing a meandering memoir into a structured narrative--the real-life Don starts a journey to make his actual life into a better story.

In this book, we have a front-row seat to Miller's journey--from sleeping all day to riding his bike across America, from living in romantic daydreams to facing love head-on, from wasting his money to founding a life-changing nonprofit.

Guided by a host of outlandish but very real characters, Miller teaches us:

Through heart-wrenching honesty and hilarious self-inspection, Miller takes readers through the life that emerges when it turns from boring reality into a meaningful narrative.

Exactly what I wanted and needed to hear (read)!

Inspired me to think about my own story and create new ones.

Loved this book, it is well written and very meaningful. I purchased another book by Don right after listening to this one. You get a new perspective on life and what you will make your own story going forward.

This title is due for release on September 28, 2009
We'll send you an email as soon as it is available!