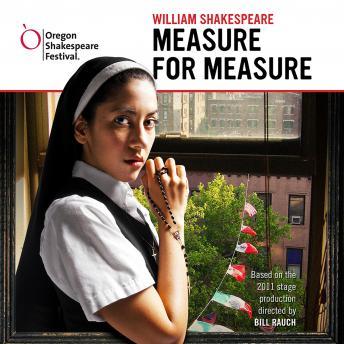 Blackstone Audio is proud to present the Oregon Shakespeare Festival’s production of Measure for Measure, Shakespeare’s compelling tragicomedy that explores restraint—and lack thereof.
Who legislates morality?
The duke’s authoritarian deputy, Angelo, is hell-bent on stamping out moral decay. He reactivates outdated draconian laws and aims his arrogant crosshairs at a young man whose fiancée is pregnant, sentencing him to death. Angelo is sternly incorruptible—until he meets Isabela, a beautiful religious novice whose desirability arouses him. Flavored with live music by the mariachi band Las Colibri, this vigorous, modern production of Shakespeare’s tragicomedy reveals what can happen when sex, religion, and politics collide.

This title is due for release on January 18, 2012
We'll send you an email as soon as it is available!