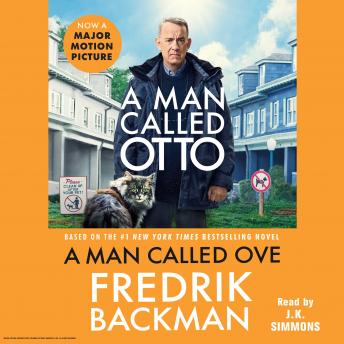 A Man Called Ove: A Novel

In this New York Times bestselling “charming debut” (People)—now a major motion picture starring Tom Hanks—from one of Sweden’s most successful authors, a grumpy yet loveable man finds his solitary world turned on its head when a boisterous young family moves in next door.

Meet Ove. He’s a curmudgeon—the kind of man who points at people he dislikes as if they were burglars caught outside his bedroom window. He has staunch principles, strict routines, and a short fuse. People call him “the bitter neighbor from hell.” But must Ove be bitter just because he doesn’t walk around with a smile plastered to his face all the time?

Behind the cranky exterior there is a story and a sadness. So when one November morning a chatty young couple with two chatty young daughters move in next door and accidentally flatten Ove’s mailbox, it is the lead-in to a comical and heartwarming tale of unkempt cats, unexpected friendship, and the ancient art of backing up a U-Haul. All of which will change one cranky old man and a local residents’ association to their very foundations.

A feel-good story in the spirit of The Unlikely Pilgrimage of Harold Fry and Major Pettigrew’s Last Stand, Fredrik Backman’s novel about the angry old man next door is a thoughtful exploration of the profound impact one life has on countless others. “If there was an award for ‘Most Charming Book of the Year,’ this first novel by a Swedish blogger-turned-overnight-sensation would win hands down” (Booklist, starred review).

I loved this story. Reminded me of my father in-law. And J.K. Simmons was fantastic. Highly recommend.

J.K. Simmons did an incredible job reading this great book, he definitely only added to the beautiful listening experience. What a book, the depth and humor, the hilarious, spot-on descriptions of Ove's observations and emotions. This book is a gem and I might listen to it again soon.

So heartwarming. Great narrator too.

I laughed and laughed through out the book. Then then end...bittersweet. I cried like I have never cried at the end of a book. This book was my father, it was Grumpy Old Men movie in one person. It was love, heartache, sorrow, mourning and love again. I never wanted it to end. But in the end everything must end. Beautiful.

I avoided this book for many years because the bad reviews said it was about a suicidal man who was mean to an injured cat. This sounded awful to me but my sister-in-law recommended it. I finally read it an absolutely love it! This is a deeply thoughtful and heartwarming story that was very well done by the performer. I laughed and cried, it was just beautiful!

Man, what a good book! Well written, detailed, full of heart, with a satisfying conclusion. Never been so emotionally involved in a story before. Also J.K. Simmons’s narration put it over the top—part of the reason I started the book is because I heard the sample with his narration. Definitely recommend!

I haven't been quite so moved by a book in a long time. It was funny, heart wrenching and memorable. I couldn't figure out at the beginning what redeeming qualities this man could have. It was interesting to see him evolve . I would highly recommend it!

Loved this. I usually, exclusively, listen in the car. I listened to this anytime I got a chance. Well written and thoroughly, entertaining.

I usually like mysteries but this quirky book took me by surprise! I loved it. Great story of simple mans life.

All I can say is Wow! I haven’t enjoyed a story this much in years - it made me laugh, cry, anxious, indignant, but most of all it warmed my heart so much. Thank you Ove

Really enjoyed this story, could easily relate to the characters.

I loved this book. It’s slow paced and purposeful, just like Ove. I literally laughed out loud several times. And I caught myself wiping actual tears, too. I’m going to miss his stories now that the book has ended.

Thoroughly enjoyed from start to finish

I decided to read Ove after enjoying Anxious People and wow. Man Called Ove is one of my favorite books of all time! Bachman pulls the reader into the world he has created from the first page. His characters are so real, with the same insecurities and challenges almost all of us have had ourselves. Where I believe Bachman really shines is the natural dialogue and vivid descriptions. As others have said, one minute I was laughing and the next crying. Topping off the exceptional story and style is Simmons narration! Would love to see him in the role of Ove someday.

This title is due for release on November 26, 2019
We'll send you an email as soon as it is available!