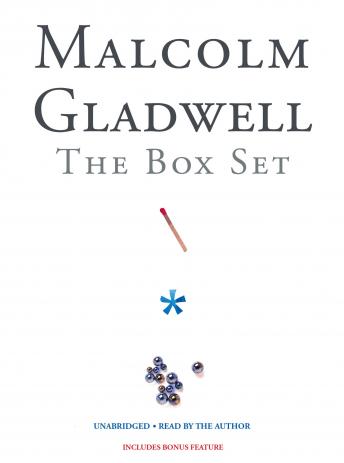 For the first time all three of Malcolm Gladwell's bestselling, groundbreaking audiobooks are available together in an 'instant classic' box set at a value-price.

THE TIPPING POINT: The tipping point is that magic moment when an idea, trend, or social behavior crosses a threshold, tips, and spreads like wildfire. Just as a single sick person can start an epidemic of the flu, so too can a small but precisely targeted push cause a fashion trend, the popularity of a new product, or a drop in the crime rate. This widely acclaimed bestseller, in which Malcolm Gladwell explores and brilliantly illuminates the tipping point phenomenon, has already changed the way people throughout the world think about selling products and disseminating ideas.

BLINK: In Blink, Malcolm Gladwell revolutionizes the way we understand the world within. Blink is a book about how we think without thinking, about choices that seem to be made in an instant-in the blink of an eye-that actually aren't as simple as they seem. Why are some people brilliant decision makers, while others are consistently inept? How do our brains really work-in the office, in the classroom, in the kitchen, and in the bedroom? And why are the best decisions often those that are impossible to explain to others? Blink reveals that great decision makers aren't those who process the most information or spend the most time deliberating, but those who have perfected the art of 'thin-slicing'-filtering the very few factors that matter from an overwhelming number of variables.

OUTLIERS: In this stunning audiobook, Malcolm Gladwell takes us on an intellectual journey through the world of 'outliers'-the best and the brightest, the most famous and the most successful. He asks the question: what makes high-achievers different? His answer is that we pay too much attention to what successful people are like, and too little attention to where they are from: that is, their culture, their family, their generation, and the idiosyncratic experiences of their upbringing. Along the way he explains the secrets of software billionaires, what it takes to be a great soccer player, why Asians are good at math, and what made the Beatles the greatest rock band. Brilliant and entertaining, OUTLIERS is a landmark work that will simultaneously delight and illuminate.

This title is due for release on May 4, 2010
We'll send you an email as soon as it is available!