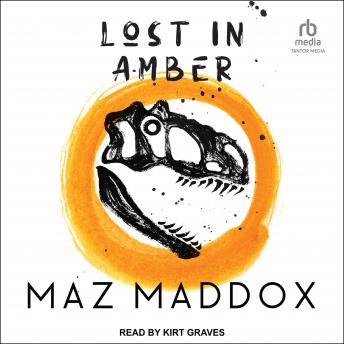 Being alive for millions of years means I'm rarely surprised.

In the long expanse of my existence, I've been rescuing fossils for only a breath. During that time, my path has crossed with many different people-shifter and human alike. Some friendly, some nefarious.

A hundred years ago, one such man graced me with his presence. He was one of the few to have almost killed me.

Imagine my surprise when I see him again, buying the rarest amber fossil to have ever been discovered.

Precious. Beautiful. Unique. A true treasure millions of years in the making.

I won't let him get away again.

I adored Yu and Lance's story when I first read it, and listening to the audio only added to my enjoyment. Yu and Lance couldn't have been more different in appearance and mannerisms--Lance was an old-fashioned, buttoned-up science nerd while Yu's laid-back charm and impeccable fashion sense made him a head turner wherever he went. Their first meeting as rivals decades in the past set them up as two shifters who would never get the chance to be together, so when they stumbled across each other again in China I was thrilled to see how it would all play out. It felt fitting that once again the two of them were on opposite sides of what to do with the amber fossil Lance had been sent to retrieve, but when a third party swooped in to threaten both of their plans, they had to band together to come out on top. I loved the rivals-to-lovers energy their initial encounters had, and it was absolutely hilarious to see how miffed Lance was when Yu swept into his life and disrupted all his plans. The attraction between them buzzed brightly, but I didn't think either man would allow himself to act on it as long as the fossil was at stake. Once they started actively working together instead of fighting each other at every turn, I saw a natural partnership develop between them. Yu and Lance, it turns out, made a fantastic team, and things only got better once they let their chemistry boil over into heated nights of passion. I was entertained, I was in love, and I was really interested in finding out how they'd get out of China without their relationship falling apart. Thanks to some meddling from well meaning brothers, their journey had a few more twists and turns than I was expecting, but I'm still very satisfied with Yu and Lance's happy ending. **I voluntarily listened to a free copy of this book. This review expresses my honest thoughts and opinions.

RELIC is back!! Another dinosaur and another adventure!! I love this series and loved to find out more about Yu. This is a fresh new story and with a new approach of a missed opportunity, epicly long second chances story and dinosaur duo, I felt like this story was different to the ones before. Although I love love LOVE Dalton and did miss him, I think Yu 's more serious and reserved story fits him perfectly. This series is reigniting my love and interest in dinosaurs and I can't wait for more. I look forward to Daddy Montana finding his next love hopefully soon!!; Fantastic narration! loved it!!

The 4th book in the Relic series follows Dino Shifters Yu and Lance and their adventures in China. it is a fun and fairly short story that is a great addition to the series. The action is great and so are the new and newish characters. One thing I love about this series is how each book has a slight different feel based on the main dino shifter infeatured in the book. The narration is good and consistentwith the previous audiobooks.

I enjoyed this book and liked the narration. Kirk Graves adds another dimension to the story and the characters. I love this series and I liked getting to learn more about Yu. He is a rather taciturn and it is nice seeing him put himself out there. We get to learn more about Yu and Lance. These two have history and it is fun listening to them figure themselves out. They have to work together to reach their common goal and to survive. Their story is full over mystery, action, adventure, humor, and deeper connections.

I love this series. It really makes me reconsider what we really know about dinosaurs and other prehistoric animals. This book is Yu and Lance's story. I like them together. It takes a bit for Lance to get completely in sync with what his heart wants so it's fun to watch. I like seeing the other guys from the series as well and would love to see a spin off series for the guys in Lance's group!

Book: 5 stars Narration: 4 stars Maz Maddox and me are a very great fit, she writes epic books and I love them all. Lost in Amber was the ultimate getaway from real life, and so enjoyable I’ve just finished what felt like seconds. - adventure book - lovable characters - minimal angst - well written - great plot - dinosaur shifters - longing and pinning - medium heat but good chemistry - found family and the best side characters - Forever together

Loved the narration for this one - With this being a shorter read I liked the audio version It brought the characters and events to life so much more than had I just read it - saying something as I have a vivid imagination Definitely, a lot more time is spent on the adventure side of things than the romance side as well as setting up some future events We get a bit more background into some of the characters, glimpses at what is to come and we get to know Yu on a more personal level As we have come to expect from this series Lost in Amber is packed with banter, action, and a touch of angst topped off with a whole lot of smexy

Loved Yu's story. I always thought he was a little mysterious. He and Lance met a hundred years prior under explosive circumstances, and not in a good way! When they meet again, it's over acquiring a fossil. What ensues is a fun adventure involving candy, an NB dinosaur and unscrupulous dealers and gangs. The romance is sweet, with a pinch of hurt/comfort and a bit of heat. Also the hint of future stories is tantalising (Montana?, Reuben?). The narration rocks an already brilliant story! I loved Kirt Graves portrayal of Lance - I could see the prissy man in my mind's eye - and his his voice for Xiang was fun as well. Again, another great performance from Kirt Graves.

The fourth book in the RELIC series, Lost in Amber, is a great addition to this humorous, adventurous world. I highly suggest reading the first three books before starting this one, but it’s not necessary. The author does a good job of providing enough explanation that anyone just starting the series can still enjoy the story. Yu and Lance met once before years ago - a meeting that ended with a bullet and regrets. Their second time meeting is just as explosive, but this time it’s over an amber fossil and their hearts. The story line is fast paced and exciting with humor and hilarious moments. The romance that developed between Yu and Lance was cute and heartwarming (and HOT). I love the dinosaur moment that occurred between them that sealed the deal that they cared for each other. The audiobook was narrated by Kirt Graves who did a great job as usual. Kirt performs this story with energy that’s contagious. I was excited and engaged throughout the narration. The audiobook production was well done.

Another excellent read in the series. * adventure * second chances * dinosaur shifters * rival teams This was fun, a romp through Shanghai as Yu tried to obtain an amber fossil worthy of Jurassic Park and keep it from the bad guys, all the while guarding his heart. But it still had the ability to bring a tear or two to my eyes. Kirt Graves does an excellent job with the narration. Highly recommended.

I loved this book as an individual and for the next book in the series. The action was on point. The romance was swoon worthy and it was narrated to perfection

First let me tell you, I am absolutely in love with this series. The whole take on our dinosaurs sleeping through extinction and then waking up millions of years later as shifters & not having a clue what happened is intriguing. Anyway, 100 years ago Lance shot Yu at a dig site by mistake. Lance nursed him back to health & then sent him away. Neither thought they would see each other again so imagine their surprise when they do end up going after an amber fossil. They both want it for different reasons. Lance cracked me up as he is only about 3' tall in his shifted form, but sees himself as a fierce defender/protector. We are introduced to some new characters, a sweet nonbinary microraptor named Xiang, and I hope we see more of them in future books. And the group that Royal ran into in the prior book & find out what they are really up to. Montana is still grieving for his dead mate & I hope he finds love again. Maybe Ruben? Also, I'm hoping that Origin will get their own spin-off. It was a quick sweet read & I can't wait for the next book in the series.

This title is due for release on November 8, 2022
We'll send you an email as soon as it is available!