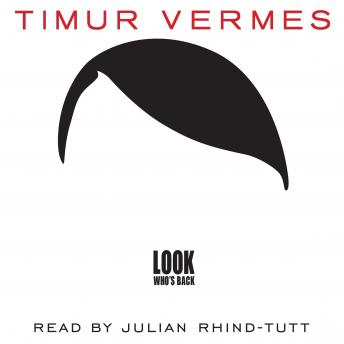 HE'S BACK AND HE'S FUHRIOUS!
'Desperately funny . . . An ingenious comedy of errors.' --Janet Maslin, The New York Times
'Satire at its best.' --Newsweek
In this record-breaking bestseller, Timur Vermes imagines what would happen if Adolf Hilter reawakened in present-day Germany: YouTube stardom.
Adolf Hitler wakes up on a patch of open ground, alive and well. It's the summer of 2011 and things have changed--no Eva Braun, no Nazi party, no war. Hitler barely recognizes his beloved Fatherland, filled with immigrants and run by a woman.
People certainly recognize him--as a flawless impersonator who refuses to break character. The unthinkable happens, and the ranting Hitler goes viral, becomes a YouTube star, gets his own TV show, and people begin to listen. But the Fuhrer has another program with even greater ambition in mind--to set the country he finds in shambles back to rights.
With daring dark humor, Look Who's Back is a perceptive study of the cult of personality and of how individuals rise to fame and power in spite of what they preach.