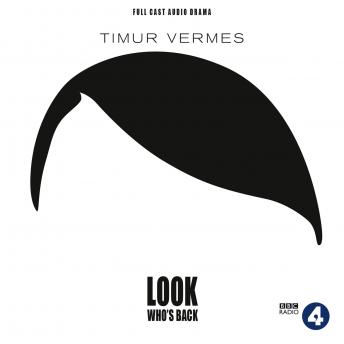 Look Who's Back (Audiodrama)

Berlin, Summer 2011. Adolf Hitler wakes up on a patch of open ground, alive and well. Things have changed - no Eva Braun, no Nazi party, no war. Hitler barely recognises his beloved Fatherland, filled with immigrants and run by a woman. People certainly recognise him, albeit as a flawless impersonator who refuses to break character. The unthinkable, the inevitable happens, and the ranting Hitler goes viral, becomes a YouTube star, gets his own T.V. show, and people begin to listen. But the Führer has another programme with even greater ambition - to set the country he finds a shambles back to rights.
Look Who's Back stunned and then thrilled 1.5 million German readers with its fearless approach to the most taboo of subjects. Naive yet insightful, repellent yet strangely sympathetic, the revived Hitler unquestionably has a spring in his step.

This title is due for release on November 8, 2017
We'll send you an email as soon as it is available!