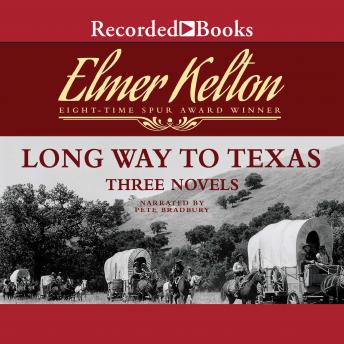 Long Way to Texas brings together three rare Kelton novels, all with Texas roots. In Joe Pepper, the titular character, while awaiting a hangman's noose, tells the story of how he discovered a propensity for violence while seeking revenge. The irony is that Joe's keen sense of justice puts him on the wrong side of the law. Long Way to Texas, taking place just after the Civil War battle of Glorieta Pass in New Mexico, is the story of Lt. David Buckalew, whose remnant of Confederate riflemen is under siege and low on rations and water. Complicating matters is the young officer's self-doubt and fear of failure. Thomas Canfield of Eyes of the Hawk, known to the Mexican citizens of his town of Stonehill, Texas, as 'El Gavilan'-the Hawk-is not a man to forgive a wrong. He sets out to prove this to an insolent ranchman rival who intends to build a fortune at Canfield's expense. The Hawk has a radically different idea: he will destroy the town before yielding to his enemy. This omnibus edition of three novels by Elmer Kelton features an introduction by Dale L. Walker, author of twenty-three novels and a past president of the Western Writers of America.

This title is due for release on February 15, 2018
We'll send you an email as soon as it is available!