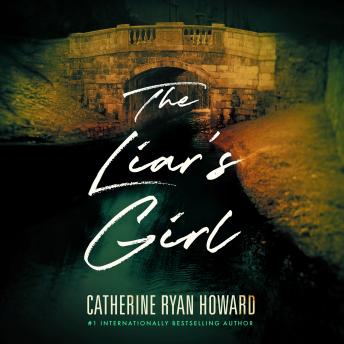 Her first love confessed to five murders … but the truth was so much worse.

Will Hurley was an attractive, charming, and impressive student at Dublin’s elite St. John’s College—and Ireland’s most prolific serial killer. Having stalked his five young victims, he drowned them in the muddy waters of the Grand Canal. Sentenced to life imprisonment when he was just nineteen, Will is locked away in the city’s Central Psychiatric Hospital.

Freshman Alison Smith moved to the Big Smoke to enroll in St. John’s and soon fell hard for Will Hurley. Her world bloomed … and then imploded when Liz, her best friend, became the latest victim of the Canal Killer—and the Canal Killer turned out to be the boy who’d been sleeping in her bed. Alison fled to the Netherlands and, in ten years, has never once looked back.

When a young woman’s body is found in the Grand Canal, Garda detectives visit Will to see if he can assist them in solving what looks like a copycat killing. Instead, Will tells them he has something new to confess—but there’s only one person he’s prepared to confess it to.

The last thing Alison wants is to be pulled back into the past she’s worked so hard to leave behind. Reluctantly, she returns to the city she hasn’t set foot in for more than a decade to face the man who murdered the woman she was supposed to become.

Only to discover that, until now, Will has left out the worst part of all …

This was a fun audiobook to listen to - I liked that there were multiple narrators to differentiate different character perspectives and that it kept me guessing.

It was excessively just okay.

I liked the suspense in the book and the development of characters. I did not like the narrators at all, which might have lessened my enjoyment unfortunately.

I enjoyed the book and it kept me interested until the very end. I like books where the characters are flawed but interesting. I very much liked the main reader. As Allison she did an excellent job.

I feel the pace of the book was steady. The characters felt real. The ending seemed a little underwhelming, but it was overall good. Might give it another listen some time down the road.

Great twist on the final solution.

Well, it was certainly not, what I expected. But at the same time, I am not sure, what I expected. It had it's twists and unexpected moments, but it did not push me to the edge of my chair - so to speak - at any point of the story. I was not intrigued in knowing what happens next or who dunnit. It was okay entertainment, but I wouldn't recommend it to my friends.

It was definitely a surprisingly good book. I wasn't quite expecting the way it went...

Excellent book! The ending was unexpected and great! I recommend it.

Entire audible from start to finish exciting and kept me entertained.

Fascinating characters, Vivid settings that you can actually imagine being part of. Most of all thought-provoking and detailed storyline. Definitely twists in the plot I was not expecting.

I hadn't read this author before, but I enjoyed the book a lot. The narration was really good, and the story actually kept me guessing, which is what you want in a mystery. There's a bit of a twist at the very end that I did not see coming, too, so that was a great little surprise...just when you think you know what happened!

You need to pay attention because it goes between current day and 10 years ago when the crime was committed. The narration was spot on and the characters were well-developed.

The book was ok...a few twists...I kinda predicted the ending

A listen with a twist. Loved it.

I really enjoyed this book. It kept me wanting to keep listening, and I liked the ending, though I agree with another reviewer that it was a little underwhelming. Overall though a solid 4.5 stars for me. I have already purchased another book by this author!

Ok but the story drags at certain points.

I thoroughly enjoyed this book. It was easy to follow and the story was great with a good ending. Narrator did a great job and I love the Irish accent. This is a great selection if you’re looking for something easy that you don’t have to pay so much attention to but you still want to be entertained.

Love it ! I actually finished it in 2 days cause I couldn’t stop listening