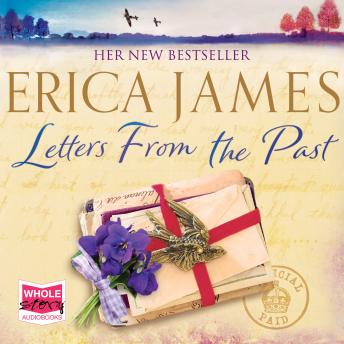 Letters From The Past

It's the autumn of 1962 in the idyllic Suffolk village of Melstead St Mary. Evelyn Devereux's husband Kit is planning their 20th wedding anniversary party. But as they prepare to celebrate, Evelyn receives an anonymous letter that threatens to unravel the secrets she's kept hidden for many years - secrets that reach back to the war and her days at Bletchley Park.

Evelyn's sister-in-law, Hope, has brought joy to countless children with her bestselling books, but despite having a loving husband and caring family, happiness has never come easily to her. Then in an instant her fragile world is turned upside down when she too receives an anonymous letter.

Across the village, up at Melstead Hall, Julia Devereux has married into a life beyond anything she could have dreamt of, not realising until it's too late that it comes with a heavy price.

Meanwhile, in the sun-baked desert of Palm Springs, Romily Devereux-Temple, crime-writer and former ATA pilot, is homesick for her beloved Island House, where she's saved the day more times than she can count. On her return home, and shocked to learn what has been going on in her absence, she finds herself reluctantly confronting a secret she's kept hidden for a very long time. Once again Romily is challenged to save the day and hold the family together. Can she do it, and maybe seize some happiness for herself at the same time?

Praise for the author:

'A glorious summer story which sizzles with passion: idyllic location, compelling characters and lives so interwoven that their secrets have the power to change everything. I wanted it to go on forever'
CATHY BRAMLEY

'Absorbing and uplifting' MY WEEKLY

Fabulous story with great characters. All enhanced by superb narration by Ms Redgrave!

The narrator of this book is sending me asleep, her tone is so flat. As a consequence, I have lost track of this book at chapter 6.

Wonderful story’s for difficult to put down!

This book was randomly selected from VIP selection. What a great find. I love the entire story from start to finish. Family and friends interwoven into one complete tale. Highly recommended for a relaxing read. Narration was brilliant.

Liked the book. Becoming a fan of this author. However, found the book left loose ends and not sure if there will be a follow up book to tie up those loose ends.

Really enjoyed the continuation of the storylines. But, the ending left more questions than answers - I do hope there is a final book in this series.

It was nice indeed

I could not connect with this book for some reason.

It's 1962, in the Suffolk countryside of England, and the Devereaux family is prospering and happy. But Evelyn has a secret she's never told her beloved husband, Kit. Hope, Kit's sister, has never felt completely secure in her happiness, despite her loving husband, Evelyn's brother Edmund, her successful career writing children's books, and her adopted daughter, Annalise. Julia, married to the oldest Devereaux sibling, Arthur, has been trained most of her life, by her father and new by Arthur, to believe it's her duty to be obedient, and that anything that goes wrong is her fault. The stepmother and matriarch of this family, Romily Devereaux-Temple, is a writer of crime fiction, and a former WWII pilot of of the ATA--the Air Transport Auxiliary. She's away, in Palm Springs in the US, to discuss a proposal to turn one of her books into a movie. Her housekeeper, Florence, is at home, though. All of these women have secrets or insecurities. When poison pen letters start arriving, it disrupts all their lives. Evelyn's secret dates back to World War II, and her time as a code breaker at Bletchley Park. Romily also has a secret, from her time in the ATA, that she has never fully faced up to herself, never mind revealed to anyone else. The other women are taunted with claims their husbands are unfaithful, and their insecurities make them vulnerable. These are mostly good people, doing their best, and the bad guys are few, and, if not likable, at least recognizable and understandable. The network of relationships here is complex and strong. This is a warm and satisfying listen. Recommended. I bought this audiobook.

loved the narrator once I got into the book it was a good listen. I found the book not easy to get into as there are too many characters to begin with and it took me a while to understand whos who, maybe it's just my weak memory

I enjoyed getting to know the characters enormously. The reading was superb, Ms Redgrave has a voice level and modulation that I find most enjoyable.

How funny how such open ended statements could cause such problems in society!

Story progresses way too slow for my taste. I lost interest after 2 hours in.

Complicated at first leaning all the different characters in all the flashbacks . Butt quite interesting developments ! Enjoyable !

Loved the two Erica James books that I listened to. Country life in England.

Not bad a few loose ends though

Thoroughly enjoyed this book. A lot of characters to remember at the start

Engaging story. The characters are well rounded with interesting back stories. The narrator really brings them to life. I thoroughly enjoyed it.

I really enjoyed this book. It was a gentle read and an even gentler reader. It was well-conceived and satisfying with likable characters. I highly recommend this if you’re looking for a sweet ride.

It was good for a free VIP book.. enjoyed the story..

I Loved this book! I couldn't stop listening! The narrator was great, and she did a fantastic job narrating! I'll be looking for more from both Erica James, and Jemma R.

Nice follow-up to her first book! Interesting set of characters that the author weaves stories about their intertwined lives. It seems like the extended family makes a habit of jumping into bed with older men and ends up paying the consequences... good and bad!

I couldn’t get into it. Too many characters and I didn’t love the nararator.

Good book, but not great.

This story had it all. Romance, history, family rivalry, close family bonds, and moral messages. I enjoyed it immensly. At times, the narrator read really low, so that it was hard to understand what she said.

Creative narration. Story was captivating after first few chapters End abruptly pulled together Might be me!

The characters were developed well and I liked learning about them. The storyline was good enough for me to finish the book. I figured out the antagonist pretty much right away which means it made the reading slightly dull for me.

Loved the style of the book and every characters story was equally interesting.

Great sequel to Coming Home to Island House. Characters are further developed and children are grown up from previous book and have their own stories. New characters enter into their lives and I enjoyed it a lot.

This title is due for release on April 16, 2020
We'll send you an email as soon as it is available!