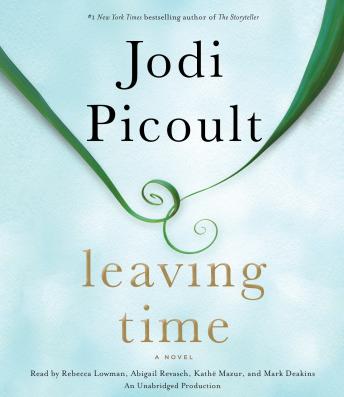 Throughout her blockbuster career, #1 New York Times bestselling author Jodi Picoult has seamlessly blended nuanced characters, riveting plots, and rich prose, brilliantly creating stories that “not only provoke the mind but touch the flawed souls in all of us” (The Boston Globe). Now, in her highly anticipated new book, she has delivered her most affecting novel yet—and one unlike anything she’s written before.

For more than a decade, Jenna Metcalf has never stopped thinking about her mother, Alice, who mysteriously disappeared in the wake of a tragic accident. Refusing to believe that she would be abandoned as a young child, Jenna searches for her mother regularly online and pores over the pages of Alice’s old journals. A scientist who studied grief among elephants, Alice wrote mostly of her research among the animals she loved, yet Jenna hopes the entries will provide a clue to her mother’s whereabouts.

Desperate to find the truth, Jenna enlists two unlikely allies in her quest. The first is Serenity Jones, a psychic who rose to fame finding missing persons—only to later doubt her gifts. The second is Virgil Stanhope, a jaded private detective who originally investigated Alice’s case along with the strange, possibly linked death of one of her colleagues. As the three work together to uncover what happened to Alice, they realize that in asking hard questions, they’ll have to face even harder answers.

As Jenna’s memories dovetail with the events in her mother’s journals, the story races to a mesmerizing finish. A deeply moving, gripping, and intelligent page-turner, Leaving Time is Jodi Picoult at the height of her powers.

“The Elephant” from NATURAL HISTORY by Dan Chiasson, copyright ©2005 by Dan Chiasson. Used by permission of Alfred A. Knopf, an imprint of the Knopf Doubleday Publishing Group, a division of Random House LLC. All rights reserved.

“Picoult writes with a fine touch, a sharp eye for detail, and a firm grasp of the delicacy and complexity of human relationships.”—The Boston Globe

“Picoult is a master of the craft of storytelling.”—Associated Press

This book was outstanding! Just the right amount of drama, love & suspense. I read a lot & the twist at the end even surprised me. Informative too about animal relationships. A must read/listen!

Very intriguing for the 1st 3/4 of the book. The last 1/4 was not to my liking ! ButI am amazed by the recherch that was done . Would recommend for animal lovers.

Love this book and the twist at the end ... that I didn't see coming.

Loved this book and this author. This was my first audio book and I hooked. Jodi Picoult is an amazing author and I can't wait to download more of her books.

Loved this book! The suspense and trying to fit pieces together was fun! I loved the pieces read by Alice about the elephants. It really helped to understand Maura's actions. Beautifully written. Kept my attention. I found myself making excuses to go for a drive kid-free just so I could listen to a few more minutes (I listen in the car to help with my thousands of miles of driving for work). Loved every bit!

I loved this book! An amazing mystery involving psychic phenomena! Even ghosts! As usual well written and thought provoking. It saddens me that elephants are mistreated but does not surprise me. Humans seem to like to take advantage of anything , situation, animal or person and use it till the world screams. Look who we elected President in 2016. Write a book about the ethical implications of that Jodi! Again thank you for this amazing wonderful eye opening book. I will go to www.elephants.com and donate!

I have to say my take is very different than the others I've read here-- the elephant journal entries were, for me, what carried the book when the story line did not seem plausible, and the characters felt a bit stock. Over time the characters grew on me, and the unlikely plot line was cleared up by an unexpected and interesting twist in the end, which put everything in place... but I wouldn't have stayed with it were it not for the beautiful language and fascinating story of the elephants. The whole book took on a depth through these sections.

The narration was a tad slow for my liking, but well done. The elephant facts were enlightening and interesting, though perhaps a little less information or repetitiveness would have been just right. Interesting story with a plot twist which is always a plus. Overall, very good.

Overall O enjoyed the story and especially the rid nuts thrown in about elephants. Narration was good.

Well, I certainly know a lot about elephants than I ever thought I wanted to! Picoult's editor should have insisted that she pare down some of the elephant narrative. There is waaay too much if it, and it definitely bogs down the story! Nonetheless, she did catch me by surprise with the ending, so that saved the novel for me in some respect. Still, I found the relentless elephant stories a bit plodding and they were mostly irrelevant to the story and plot line. I can't help but think Picoult, in her passion for doing something about the plight of the elephant in the wild, decided to write a novel around that subject, but it just didn't work. For that reason, I give the book only two stars.

I enjoyed this book and really enjoyed the unexpected ending.

This was my first read of Jodi Picoult and I was not disappointed. Great story with an amazing twist of an ending that I was definitely not expecting. Learned a lot about elephants too. Narration was good as well.

Great story, as usual, from Jodi Picoult. Very interesting and kept me guessing the whole time.

Love the depth of the sotry and ws definitely not expecting the ending! Loved all the narrators except for "Alice." She was too drawn out, monotone, and almost theatrical sounding.

Fantastic! Love this author, she never fails to inspire.

I loved this book and would highly recommend it. It's about the love between a child and her mother and then, a lot about elephants. I thoroughly enjoyed it.

Love when I can learn something while being entertained. I did not anticipate the path of this story which I throughly enjoyed.

Picoult never disappoints me - always holds my attention to the end

The elephant content is fascinating. A good read for consumers of historical fiction looking for something completely different. Unpredictable drama. Narration outstanding.

Very well done. Highly recommend this book. Each character was well developed. Loved the twists and turns. Could not wait to hear how the story ended.

Wonderful characters and a interesting story . Loved the information about Elephants. Great ending.

Such a great book to listen to and such an interesting plot. I love the incorporation of the elephants and how much I learned about these gentle giants throughout the novel. It is my new favorite Picoult novel and I am certain that I am not alone!

I have no desire to hear about elephants ever again after listening to this book. Interesting plot that slowed down at times. Ending was surprising and inventive. Shift in character point of view added rich complexity to the story. Picoult sure does her homework for the background context!

This title is due for release on October 14, 2014
We'll send you an email as soon as it is available!