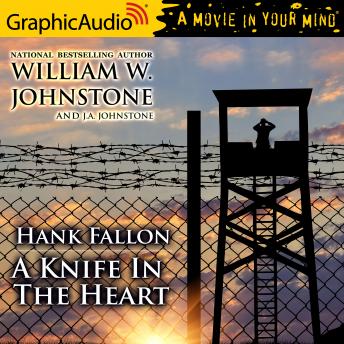 A Knife In The Heart [Dramatized Adaptation]: Hank Fallon 4

'In this action-packed Hank Fallon western, the falsely imprisoned lawman finds himself holding the keys to one of America’s most dangerous penitentiaries...

As both a prisoner and an undercover operative, U.S. Marshal Hank Fallon has faced down some of the most vicious, terrifying, cold-blooded thieves and murderers in the West. Now, Hank is finally free and he’s got no intention of setting foot inside a jail ever again.

But the new federal prison being constructed in Leavenworth, Kansas, needs a warden and Hank is the right man for the job. He’s got the scars to prove it—and to keep the peace. But keeping these lawless hornets in their nest is no easy feat. And when several escape before Leavenworth is at maximum security, they take Hank’s family hostage.

To save his wife and baby daughter, Hank will have to get as down and dirty as the devils he’s pursuing—and they won’t be taken alive.