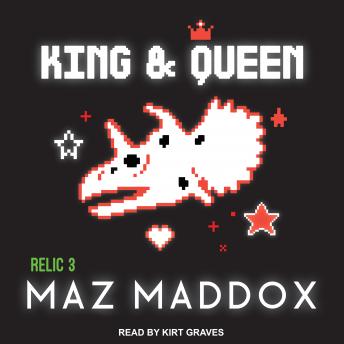 Running into your one night stand is always awkward.

It's especially awkward when said hunky hookup pulls you into a secret war over fossils and a kidnapped, newly awakened Albertosaurus shifter.

As if my life wasn't already a mess (understatement), now I'm cruising through Canada hunting down an ancient monster who tried to kill us, attempting to get my social media career off the ground, and ignoring my feelings for my one time fling.

Royal is hot as fire, funny, brilliant, and has a thing for dinosaurs almost as much as I do.

Probably because he is one.

Dino shifters and drag Queens, oh my. This was so much fun. Blaise was fierce. Royal was a badass IT nerd. There was drag and a clapped out car, a kidnapped brand new shifter, bad guys (I mean, proper eat you bad guys), and an incriminating video gone viral. Royal is in so much trouble, not just from his boss but from his heart too. I love this series. The narrator does a great job.

The whole concept of shape-shifting dinosaurs on a mission to keep their fossils and identity a secret is so exciting, and Royal's story was just as thrilling to listen to as I'd hoped. Kirt Graves continues to be one of my favorite narrators, and his performance made this story come to life! Triceratops are hands-down my favorite dinosaurs of all time, and while Royal wasn't exactly that, his species was close enough to have me giddy with delight. His romance with Blaise got off to a much different start than I was expecting, but I'll never complain about a steamy night of pleasure between two charismatic individuals. As seems to be the case in all of these stories so far, Royal did something super impulsive, Blaise saw things he shouldn't have, and so began the unexpected road-trip adventure to track down the bad guys. The added complication of Blaise's career aspirations made it even more fun to see how he and Royal interacted. The two of them made me laugh harder than I have in a long time, and despite all the sneaking around and dangerous circumstances, their journey was too entertaining for me to ever lose my smile. On top of giving me a highly enjoyable storyline, Royal and Blaise were so freaking cute as a couple. They resisted their attraction to each other for longer than I thought they would, but that only made their eventual coming together even more explosive. I thought it was so sweet that Royal's dino form recognized his mate before human-Royal did, and in general their emotional connection was surprisingly touching. Seeing Royal and Blaise take down the bad guys and rescue Al while looking fabulous felt like the perfect way to encapsulate what made this couple so captivating. I'm already eagerly awaiting the next book in this series because I'm sure it'll be another 5 star read! **I voluntarily read an ARC of this book. This review expresses my honest thoughts and opinions.

King & Queen is Book 3 in the RELIC series. I love this beautifully written fun, sassy, adventurous, dinosaur shifting book. This is a wonderful addition to the series and is my favorite book so far. Royal is sent on a mission, this is a new thing for him. He not only finds another shifter he also finds a boyfriend. Blaise is at a crossroads in life. He happens to love all things dinosaur. So when he sees dinosaurs fighting he does what most people would do, he films them. He them becomes Royal's companion on his journey to find the new shifter, as he was taken before Royal could get to him. I love Blaise and Royal together. I also love how Blaise is with Henry and how Henry looks to Blaise for direction. I love the end and Blaise getting to have his reading time with the children. I definitely recommend this book and series, and can't wait for more. Narrator Kirt Graves does another amazing job in this series. He is a joy to listen to and just has a way of bringing these character to life.

The story is fun to listen. Royal and Blaze are great characters. The band of brothers is sweet. This is my first book from this author but I’d gladly read more. It’s a bit of a history nerd meets the oldest dinosaur in history. Some suspense and lots of action narrated very well.

I must admit I'm not a big fan of the so called "funny" series in any genre, but this one by Maz Maddox is the exception for me. I've loved every book in the series and this one is no exception. The characters of fossil hunters, palaeontologist and dinosaur shifters actually are witty, clever and loveable as promised. If you tend to favor the darker stuff, trust me and read this series as a wonderful change of pace. Kirt Graves does a wonderful job brining out both the broad humor and the subtle wit of all these characters.

Such a fun audiobook! The whole series has been great so far…I mean it’s Dino shifters! What’s not to like! Royal and Blaze were both interesting and intriguing and their story was just as entertaining. Kirt Graves did a wonderful job bringing this story to life.

This book is such a cute, quirky, and fun book. It's different in all the best ways. While this is not the first book, it is for me, and while I want the other stories, it held as a stand-alone. Loved the characters, the relationship, and the lack of manufactured relationship angst. Great book. The audio version was well done, and Kirt Graves gave a fabulous performance.

This was such a fun and entertaining listen. I loved it. Blaze with the tire iron was the best, and the whole 'Birdcage'-esque reenactment was great. Dalton and Simon were fantastic helpers here, too. Poor Simon...learning how to 'lift and tuck'. You have to love big hulking dinos doing drag. Candy-raptor...still laughing at the name. So much fun, and Kirt Graves was fabulous and spot on for the narration. He really captured the characters, especially Dalton and his - um - exuberance. Loved seeing Royal find his man. I hope Montana gets his HEA soon.

This was so fun to listen to, the story line hooked me right from the very beginning, listened to it non stop. Blaise was such a fun character! I loved that he was also a drag queen! So sassy and snarky! It was fun getting to see Royal in the real world instead of behind a computer. I loved their banter!! Hilarious! I love the whole RELIC crew and cannot wait for more. This was fantastic and I seriously recommend this story!! Kirt Graves did a fantastic job with the narration, he makes you feel like you are there within the story!

You simply can't go wrong with dinos! I love the family of Dinosaur shifters that make up RELIC. Royal isn't normally one who visits possible sights to save fossils or meet new sleepers emerging from the earth. Blaze doesn't quite know what to think when he witnesses the fight between 2 living dinosaurs but he does know things will never be the same. The story of how these two fight to rescue the fossils and the confused new shifter is funny and well worth the listen. Blaze is a perfect addition to the family! Kirt Graves is also a superb narrator.

I have been enjoying this series so far. This book keeps up on the adventures with dinosaurs. Can’t wait to see where it goes next. The audiobook was narrated by Kirt Graves, and he did an excellent job.

The moment the audio was available i jumped on that ship! And just like with everything Kirt Graves touches, it was magnificent. The voices and characterization, the inflection and humor, Kirt elevated an already excellent book into something epic. It's an audio I will listen to again. Great job, Kirt for a spectacular narration!

For someone who isn't usually into shifter's stories I sure love them when they are about dinosaur shifters *laughs* This series is a delight: fun, entertaining, with lots of action and adventure and lovely romance :D Now is Royal's time to find love, and who could be better for a pansexual dinosaur than a genderqueer dinosaur geek? I really liked Blaise, he is smart and very sure of who he is and what he wants from life. He can be fierce (particularly when it comes to his car, Dolores :P ) but also compassionate and sweet. All the pop-culture references are always a fun bonus; yes, I'm a total nerd, deal with it :P And having Dalton and Simon showing up to lend a hand? Cherry on top! As always, Kirt Graves does an amazing job with the narration.

I adored this audiobook. There wasn't one thing I didn't love. Kirt Graves had me laughing so hard. His Blaise voice was perfect, including all the snark and femme bits. I adored both Blaise and Royal, their shyness together, their jokes, and their friendship that turned into something more. This is definitely one to take a listen to... you'll want to hear it at least once!

I read the book first and jumped at the chance to listen to the audiobook because I loved this one so much. As such, the review below is from the ebook version. Kirt Graves does a beautiful job of bringing Blaise and Royal to life as well as some other characters and their gorgeous accents. ???Spoilery I ABSOFREAKINGLUTELY LOVED, LOVED, LOVED THIS BOOK!!! Especially as I live in Alberta and LOVE Triceratops. So reading about Blaise doing the whole Jurassic Park thing and riding Royal... yeah, totally my dream when I was a kid. Thank you Maz, for opening my eyes on different dinosaurs (I’ve never even heard of a Regaliceratops before) and the fact that there’s other dinosaur museums around here. Mind you, I’ve never thought to look. I’ve been to the Royal Tyrell a time or two but not in a couple decades or so. And of course, thanks to COVID, it’ll be awhile before I can visit anything again. Like the other books in this series, I was enthralled from page one and couldn’t put it down. I cannot wait to read the next book. Highly recommend. I received a free copy of the book and audiobook from Gay Romance Reviews and am voluntarily leaving a review.