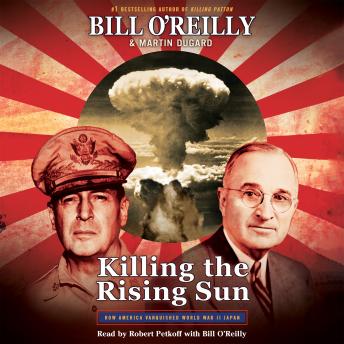 Autumn 1944. World War II is nearly over in Europe but is escalating in the Pacific, where American soldiers face an opponent who will go to any length to avoid defeat. The Japanese army follows the samurai code of Bushido, stipulating that surrender is a form of dishonor. Killing the Rising Sun takes readers to the bloody tropical-island battlefields of Peleliu and Iwo Jima and to the embattled Philippines, where General Douglas MacArthur has made a triumphant return and is plotting a full-scale invasion of Japan.

Across the globe in Los Alamos, New Mexico, Dr. J. Robert Oppenheimer and his team of scientists are preparing to test the deadliest weapon known to mankind. In Washington, DC, FDR dies in office and Harry Truman ascends to the presidency, only to face the most important political decision in history: whether to use that weapon. And in Tokyo, Emperor Hirohito, who is considered a deity by his subjects, refuses to surrender, despite a massive and mounting death toll. Told in the same page-turning style of Killing Lincoln, Killing Kennedy, Killing Jesus, Killing Patton, and Killing Reagan, this epic saga details the final moments of World War II like never before.

This is the perfect audio book for this subject matter. This book is, in short, a collection of works summarizing the war with Japan. It's not only about the bomb. A MUST READ/Listen

The bomb will always be a controversial issue as the U.S stands the only nation to have used the nuclear weapon against civilians. The Japanese concentration camps in US and Canada however is straight up messed up. It fueled the racism against east Asians in North America and subsequent dehumanization of local civilians during that pointless war in Vietnam.

An exquisite book with a fascinating dose of forgotten history

I thought this was a great read and looked forward everyday to listen to what would be happening next. I thought the walk through history was done in an excellent fashion and the narration was 100%! Well recommend.

Another fantastic historical chronical! I thoroughly enjoyed it and (re)learned the valuable history of WWII and the dawn of the nuclear age.

This should be required reading for every high school student in the US. Students need to understand the situation from all angles that factored into the decisions made during WWII in the Japanese theater. Very important that our youths are properly educated on facts.

Excellent narration of the Japanese conflict during WWII and the American victory. A tragic time for all involved. It's a fascinating read and I learned a lot about that part of WWII which I had not learned as much about as the European conflict. Highly recommend!

A great read or listen ???? An amazing testimony of why this was one of our greatest generations and to the men and women that sacrificed so much. Well done.

Great book!!!! A lot of the focus was on the atrocities of the Japanese military, the atomic bombs and the aftermath of the bombs. Learned a lot of new things from this book.

Excellent details about the actual dropping of the 2 bombs on Japan. As always the more I read about WWII in the Pacific the more I shudder. There is no irony in the fact that the final decision to end the war was evil vs. evil. Either thousands of military men die, on both sides, in an invasion. Or thousands civilians die in a milli-second. What a horrible quandary. As far as the "controversy " of the deed itself, it'll wage on forever. May God have mercy on the souls involved.

I have now finished all of the Bill O' Reilly "Killing" books. This is by far his best! I was interested in every page! The brutality of war is horrific! God Bless President Truman. All honor and respect to The Greatest Generation. This book should be required reading in all US History Classes. Great job!

Wow!! I think this is OReilly's best effort. I learned a lot and many stories I didn't know about. Gives me chills. Good job

The research involved in each of these books never ceases to amaze me, I recommended them to everyone.

Good book, kept me entertained!!! That's hard to do. Very educational and informative. LOVED it!!!!

The most informative and enjoyable book I've seen in years

Overall, very good book. This is the first book I have read from O'Reilly. I have been told by history buffs that his books have not provided any additional insight into other documented events. Not sure if that is the case, but this book really gave me insights into the reasons for why Truman did what he did.

I absolutely loved it. In fact, I plan on listening to it again. I'm looking forward to another O'Reilly book maybe Patton

Loved it! Awesome footnotes!!! I'll listen to it again sometime!

This is the 2nd book of the series I've read and I've enjoyed both. This book was very interesting and informative. The details and the footnotes were outstanding.

This is a wonderful book. My wife and I listened intently during our 12-hour drive from New Jersey to South Carolina (a lot of traffic). It made the journey more than tolerable. I am a West Point Graduate and retired Army Officer. The information on the ego of General MacArthur and the information about his family was fascinating. The disregard for life by the Japanese and U.S. Military was a reminder of what war can become. As a veteran of the Vietnam War, I believe the perception of WWII would have been much different if media coverage had been like Vietnam. The intentional destruction of cities and murder of civilians is called terrorism today. The inhumane acts in WWII were far worse than Vietnam or military actions of today. Our military men and women do believe in the principles of the Geneva Convention today, our terrorist enemy does not. It was a very thought provoking story for me.

Excellent book and quite informative. I learned a lot about WW II that I was unaware of between the U.S and Japan. While the war was a tragic time in history, I'm grateful that Japan is one of our best allies.

Fantastic work by all!! I enjoyed the in-depth look into the conflict, and tough resolution. The narrator was perfect.

Amazing book. Learned a lot what our military went through

This title is due for release on September 13, 2016
We'll send you an email as soon as it is available!