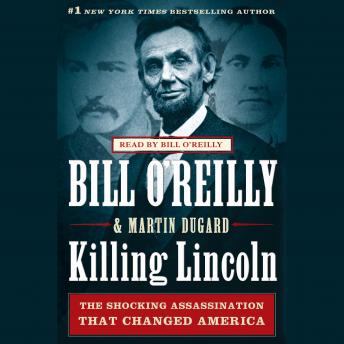 A riveting historical narrative of the heart-stopping events surrounding the assassination of Abraham Lincoln, and the first work of history from mega-bestselling author Bill O'Reilly

The iconic anchor of The O'Reilly Factor recounts one of the most dramatic stories in American history—how one gunshot changed the country forever. In the spring of 1865, the bloody saga of America's Civil War finally comes to an end after a series of increasingly harrowing battles. President Abraham Lincoln's generous terms for Robert E. Lee's surrender are devised to fulfill Lincoln's dream of healing a divided nation, with the former Confederates allowed to reintegrate into American society. But one man and his band of murderous accomplices, perhaps reaching into the highest ranks of the U.S. government, are not appeased.

In the midst of the patriotic celebrations in Washington D.C., John Wilkes Booth—charismatic ladies' man and impenitent racist—murders Abraham Lincoln at Ford's Theatre. A furious manhunt ensues and Booth immediately becomes the country's most wanted fugitive. Lafayette C. Baker, a smart but shifty New York detective and former Union spy, unravels the string of clues leading to Booth, while federal forces track his accomplices. The thrilling chase ends in a fiery shootout and a series of court-ordered executions—including that of the first woman ever executed by the U.S. government, Mary Surratt. Featuring some of history's most remarkable figures, vivid detail, and page-turning action, Killing Lincoln is history that reads like a thriller.

Fantastic book for people wanting to learn about the history of the United States. Bill O’Reilly narrates Wells is very engaging.

Absolutely Awesome. A must listen/read for all. Bill O'Reilly not only knows how to make a book exciting, his narration brings you to the moment making you feel like you are really there. If only my history teachers could have made my classes this interesting.

wonderful book, keeping my attention completely while making me thirst for more information and research about one our greatest leaders we were honored to have.

Thanks for writing this book, the history surrounding this American event are well documented and unfolded in this narrative... Thanks, Bill

Riveting insight into the cause and assassination of our 16th president. Bill O' Riley is masterful in his captivating narrative. Well done!

It was a very good book, filled with a lot of facts and information I did not know about leading up to Lincolns assassination.

This is the second audiobook I've listened to and got us through 16 hour drive to and from destination. Very good listening.

A great read! As a Canadian, I learned a lot about the assassination of Lincoln. The details on the events and how they are presented were fantastic. Bill O'Reilly is a great narrator and historian!

Very very good. Reads at times like a thriller. Great attention to detail and reveals personalities in an "up close and personal" way. Only one gripe: (to my Australian ears at least) O'Reilly seems to pronounce "cavalry" as "Calvary "...but maybe it's an accent thing...

One of the finest books I've ever read or listened to. I'm a physician and read serious material constantly. Because of this, when I have time for recreational reading, it is never non-fiction. But this book based on fact enthralled me from Kansas City, MO. until it finished before I got home in Arizona.

I learned so much that I did not know about the events leading up to the assassination.

I enjoyed this great book. Very insightful, descriptive and informative.

Love the book.... I enjoy Mr. O'Reilly's narration. I hope he does more.

Great listen! Planning to get others in the series or similar

Love the newsreporter- style it's written and told...will read (or listen to) all the other books in this series...amazingly well written....

Wonderful and enlightening book. Details of the war an Lincoln and John Wilkes booth I'd never known. The book is written in a way of almost counting down making it very luring

loved it. very educational and interesting. just didn't speak about Greeneville Tennessee where Andrew Johnson was from. I live close to his birth place and home.

Interesting read regarding some little known Civil War battles, Lincoln's last days, and the thoughts behind the assassin. Not impressed with O'Reilly's narration - barely average.

A really good book. Nicely written and narrated. Worth buying, reading and suggesting.

This title is due for release on September 27, 2011
We'll send you an email as soon as it is available!