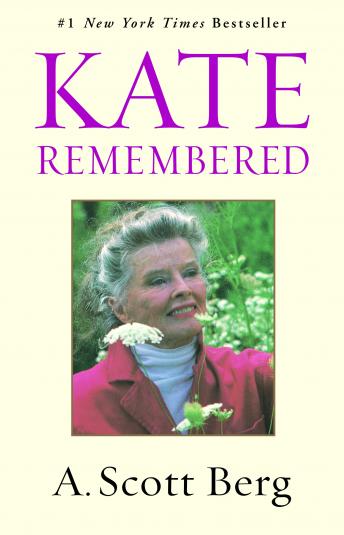 For seven decades Katharine Hepburn played a leading role in the popular culture of the twentieth century—reigning as an admired actress, a beloved movie star, and a treasured icon of the modern American woman. She also remained one of the most private of all the public figures of her time.

In 1983—at the age of 75, her career cresting—the four-time Academy Award winner opened the door to biographer A. Scott Berg—then 33—and began a special friendship, one that endured to the end of her illustrious life. Here are the stories from those countless intimate conversations, and much more. In addition to recording heretofore untold biographical details of her entire phenomenal career and her famous relationships with such men as Spencer Tracy and Howard Hughes, Kate Remembered also tells the amusing, often emotional story of one of the most touching friendships in her final years. Scott Berg provides his own memories of Katharine Hepburn offstage—quiet dinners in her townhouse in New York City, winter swims (she swam, he watched) in the Long Island Sound at Fenwick, her home in Connecticut, weekend visits with family members and dear friends . . . even some unusual appearances by the likes of Michael Jackson and Warren Beatty. Finally, Kate Remembered discusses the legendary actress’s moving farewell, during which her mighty personality surrendered at last to her failing body—all the while remaining true to her courageous character.

Kate Remembered is a book about love and friendship, family and career, Hollywood and Broadway—all punctuated by unforgettable lessons from an extraordinary life.

This title is due for release on January 1, 2003
We'll send you an email as soon as it is available!