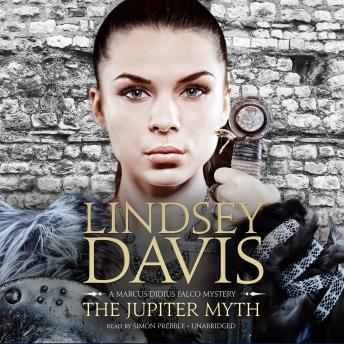 #14 of The Marcus Didius Falco Mysteries

Marcus Didius Falco is about to get involved in a nasty noir crime, involving gangsters, gladiators, and romance.

For Falco, a relaxed visit to his wife Helena’s relatives in Britain suddenly turns serious. He and his family are staying in London when Falco is summoned to the scene of a murder. The victim, Verovolcus, was a renegade with ties to Roman crime magnates operating in London, but he was also close to King Togidubnus. So when he is discovered dead, stuffed headfirst down a well, a tricky diplomatic situation develops that Falco must defuse.

His investigation leads him into the seedy underbelly of London. There is a newly built amphitheater in town, one with female gladiators, but Falco soon realizes that the initially troublesome gladiators—including one from his own bachelor past—may just give him the edge he needs to solve Verovolcus’ murder as the gangsters are pursued back to the Italian town of Ostia for a final showdown.

This title is due for release on December 27, 2016
We'll send you an email as soon as it is available!