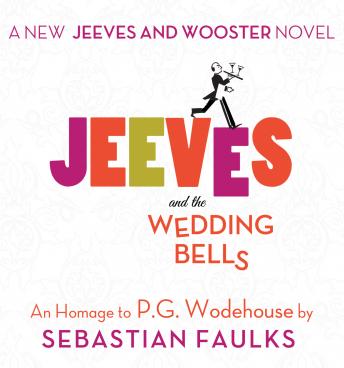 Jeeves and the Wedding Bells: An Homage to P.G. Wodehouse

Bertie Wooster (a young man about town) and his butler Jeeves (the very model of the modern manservant)-return in their first new novel in nearly forty years: Jeeves and the Wedding Bells by Sebastian Faulks.
P.G. Wodehouse documented the lives of the inimitable Jeeves and Wooster for nearly sixty years, from their first appearance in 1915 ('Extricating Young Gussie') to his final completed novel (Aunts Aren't Gentlemen) in 1974. These two were the finest creations of a novelist widely proclaimed to be the finest comic English writer by critics and fans alike.
Now, forty years later, Bertie and Jeeves return in a hilarious affair of mix-ups and mishaps. With the approval of the Wodehouse estate, acclaimed novelist Sebastian Faulks brings these two back to life for their legion of fans. Bertie, nursing a bit of heartbreak over the recent engagement of one Georgina Meadowes to someone not named Wooster, agrees to 'help' his old friend Peregrine 'Woody' Beeching, whose own romance is foundering. That this means an outing to Dorset, away from an impending visit from Aunt Agatha, is merely an extra benefit. Almost immediately, things go awry and the simple plan quickly becomes complicated. Jeeves ends up impersonating one Lord Etringham, while Bertie pretends to be Jeeves' manservant 'Wilberforce,'-and this all happens under the same roof as the now affianced Ms. Meadowes. From there the plot becomes even more hilarious and convoluted, in a brilliantly conceived, seamlessly written comic work worthy of the master himself.
A Kirkus Reviews Best Fiction Book of 2013

Jeeves and the Wedding Bells: An Homage to P.G. Wodehouse

This title is due for release on November 5, 2013
We'll send you an email as soon as it is available!