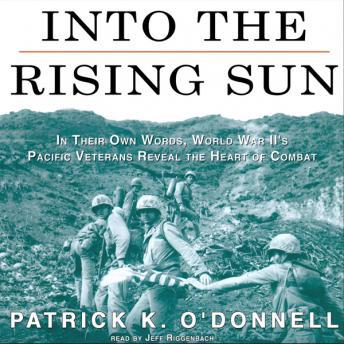 Into The Rising Sun

Patrick O’Donnell has made a career of uncovering the hidden history of World War II by tracking down and interviewing its most elite troops: the Rangers, Airborne, Marines, and First Special Service Force, forerunners to America’s Special Forces. These veterans were often the first in and the last out of every conflict, from Guadalcanal and Burma to the Philippines and the black sands of Iwo Jima. They faced a cruel enemy willing to try anything, including kamikaze flights and human-guided torpedoes. Over the course of the war, they had spearheaded D-day-sized beach assaults, encountered cannibalism, suffered friendly-fire incidents, and endured torture as prisoners of war. By at last telling their stories, these men present an unvarnished look at the war on the ground, a final gift from aging warriors who have already given so much.

Into The Rising Sun

This title is due for release on June 25, 2005
We'll send you an email as soon as it is available!