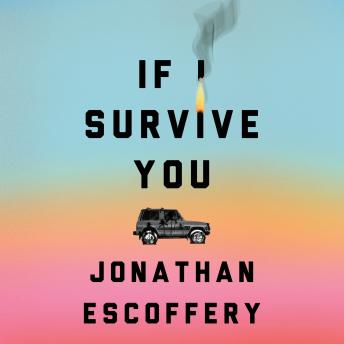 If I Survive You

'If I Survive You, the debut of rising star Jonathan Escoffery (Macmillan Audio, 8 hours and 45 minutes), is read by Torian Brackett, whose voice is the ideal instrument for this dazzling collection of linked stories, moving fluidly in and out of Jamaican patois, using first-, second-, and third-person narration to show different angles on brothers Delano and Trelawny, their cousin Cukie, their families, their schoolmates, their employers, and their girlfriends.'- Kirkus

A major debut, blazing with style and heart, that follows a Jamaican family striving for more in Miami, and introduces a generational storyteller.

In the 1970s, Topper and Sanya flee to Miami as political violence consumes their native Kingston. But America, as the couple and their two children learn, is far from the promised land. Excluded from society as Black immigrants, the family pushes on first through Hurricane Andrew and later the 2008 recession, living in a house so cursed that the pet fish launches itself out of its own tank rather than stay. But even as things fall apart, the family remains motivated, often to its own detriment, by what their younger son, Trelawny, calls “the exquisite, racking compulsion to survive.”

Masterfully constructed with heart and humor, the linked stories in Jonathan Escoffery’s If I Survive You center on Trelawny as he struggles to carve out a place for himself amid financial disaster, racism, and flat-out bad luck. After a fight with Topper—himself reckoning with his failures as a parent and his longing for Jamaica—Trelawny claws his way out of homelessness through a series of odd, often hilarious jobs. Meanwhile, his brother, Delano, attempts a disastrous cash grab to get his kids back, and his cousin, Cukie, looks for a father who doesn’t want to be found. As each character searches for a foothold, they never forget the profound danger of climbing without a safety net.

Pulsing with vibrant lyricism and inimitable style, sly commentary and contagious laughter, Escoffery’s debut unravels what it means to be in between homes and cultures in a world at the mercy of capitalism and white supremacy. With If I Survive You, Escoffery announces himself as a prodigious storyteller in a class of his own, a chronicler of American life at its most gruesome and hopeful.

A Macmillan Audio production from Farrar, Straus and Giroux.

This title is due for release on September 6, 2022
We'll send you an email as soon as it is available!