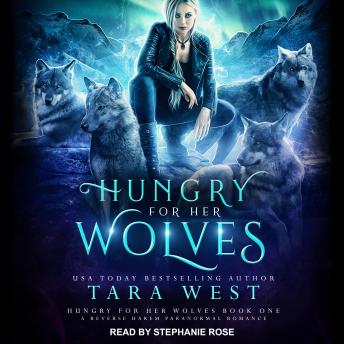 Hungry for Her Wolves: A Reverse Harem Paranormal Romance

#1 of Hungry for Her Wolves

She's desperate to sate her hunger. They're determined to possess her. Is she willing to give up her freedom for a taste of passion?

Amara was content to live as a lone wolf, the only one of her kind-or so she'd thought. Her world was flipped on its head when a strange man with a familiar scent showed up at her work, demanding a private meeting.

Desperate to find the mate Luc had scented from four hundred miles away, he was shocked to find her living as a lone wolf. Amaroki women were to be cherished and protected. What had happened to her family? More importantly, how was he going to convince her to return to the reservation with him? And how would his possessive brothers react when they found him with Amara?

Amara couldn't deny her attraction to the wolf-shifter named Luc, but she wasn't about to give up her career to mate with him and his three brothers, no matter how hot and bothered he made her. When his brothers arrived-tall, tanned, and virile-she could no longer deny her savage hunger for these shifters.

But how could she satisfy her desire and still maintain her independence with four overbearing wolves around? And how would she bond and adapt to their lifestyle when she couldn't shake her dark memories? More importantly, how would her mates react when they learned of her past? Would they reject her, or would they risk their lives to seek vengeance on those who've dishonored her?

Overall a good reverse harem book. Some of the sexual situations were a little cringey (like one mate telling a virgin he isn’t going to be gentle or repeatedly telling her she can pay him back for not being an asshole for once with sexual favors). Otherwise, an interesting story with a different twist on shifter customs.

I'll put it short, a very good book which I've finished listening too in just one day ^^ So definitely recommendable if you like fantasy and don't mind some naughty sections in a book. Stefanie is doing a great job in reading the book, nice voice changing and easy to lissten too.

Listening to this on AUDIO was incredible. I love how Stephanie Rose can change her voice for the characters. She brought this book to life! If you like Paranormal Reverse Harems with possessive & loving men then this is the book for you. Tara drew my attention in from the very beginning! Building a story of loneliness, possession, passion, and love. I couldn’t put this book down when I read it or stop listening to it.!!!

loved it so good

The storyline could have been developed a little bit better, everything seemed rushed with little character development other than the main protagonist. The steamy scenes in this book though…. I still think of them. I would recommend giving it a listen, but not my favorite shifter book.

Super engaging fun listen. It gives exactly what you want from a shifter RH. Definitely want to continue on in the series.

I love this series of books! Tara West does an amazing job! Listening to the audio brings the characters to life for me. Stephanie Rose does a fantastic job luring us into the book with her performance.

I loved this book! The storyline and characters are amazing. The Narrator did a fantastic job!

Its an okay listen .... its missing the drama.

Great can’t wait to listen to the next book.

This title is due for release on January 29, 2019
We'll send you an email as soon as it is available!