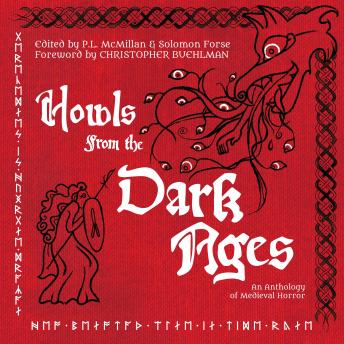 Howls From the Dark Ages: An Anthology of Medieval Horror

Uncover the secret annals of untold history in these eighteen medieval manuscripts. Each tortured scribe will bring you face to face with ancient horrors lurking in cursed castles, wild woodlands, haunted hamlets, and mysterious monasteries.

Including a lineup of authors both established and emerging, HOWL Society Press presents the first-ever anthology of historical horror from the medieval period, fittingly introduced by the writer who arguably started it all: Christopher Buehlman, author of the medieval horror epic Between Two Fires.


- 'Palette' by J.L. Kiefer
- 'In Every Drop' by Lindsey Ragsdale
- 'The Forgotten Valley' by C.B. Jones
- 'White Owl' by Stevie Edwards
- 'The Lai of the Danse Macabre' by Jessica Peter


- 'Brother Cornelius' by Peter Ong Cook
- 'The Final Book of Sainte Foy's Miracles' by M.E. Bronstein
- 'The Mouth of Hell' by Cody Goodfellow
- 'The King of Youth vs. The Knight of Death' by Patrick Barb
- Opening/Closing Credits


- 'In Thrall to This Good Earth' by Hailey Piper
- 'Schizzare' by Bridget D. Brave


- 'Angelus' by Philippa Evans
- 'A Dark Quadrivium' by David Worn


- 'A Dowry for Your Hand' by Michelle Tang


- 'The Crowing' by Caleb Stephens

This title is due for release on May 12, 2022
We'll send you an email as soon as it is available!