How the World Works 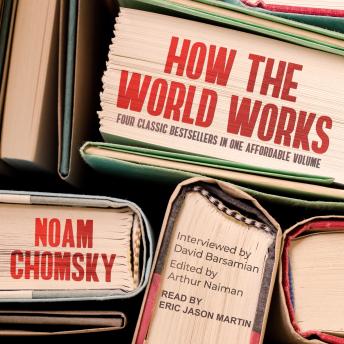 According to the New York Times, Noam Chomsky is 'arguably the most important intellectual alive.' But he isn't easy to read . . . or at least he wasn't until these books came along. Made up of intensively edited speeches and interviews, they offer something not found anywhere else: pure Chomsky, with every dazzling idea and penetrating insight intact, delivered in clear, accessible, listener-friendly prose.

And they continue to sell year after year after year because Chomsky's ideas become, if anything, more relevant as time goes by. For example, twenty years ago he pointed out that 'in 1970, about 90% of international capital was used for trade and long-term investment-more or less productive things-and 10% for speculation. By 1990, those figures had reversed.' As we know, speculation continued to increase exponentially. We're paying the price now for not heeding him them.

How the World Works