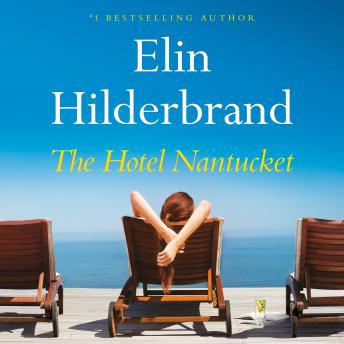 “The queen of beach reads” (New York Magazine) and #1 New York Times ​bestselling author delivers an immensely satisfying page-turner in this tale about a summer of scandal at a storied Nantucket hotel.

Fresh off a bad breakup with a longtime boyfriend, Nantucket sweetheart Lizbet Keaton is desperately seeking a second act. When she’s named the new general manager of the Hotel Nantucket, a once Gilded Age gem turned abandoned eyesore, she hopes that her local expertise and charismatic staff can win the favor of their new London billionaire owner, Xavier Darling, as well as that of Shelly Carpenter, the wildly popular Instagram tastemaker who can help put them back on the map. And while the Hotel Nantucket appears to be a blissful paradise, complete with a celebrity chef-run restaurant and an idyllic wellness center, there’s a lot of drama behind closed doors. The staff (and guests) have complicated pasts, and the hotel can’t seem to overcome the bad reputation it earned in 1922 when a tragic fire killed nineteen-year-old chambermaid Grace Hadley. With Grace gleefully haunting the halls, a staff harboring all kinds of secrets, and Lizbet’s own romantic uncertainty, is the Hotel Nantucket destined for success or doom?

Filled with the emotional depth and multiple points of view that characterize Hilderbrand’s novels (The Blue Bistro, Golden Girl) as well as an added dash of Roaring Twenties history, The Hotel Nantucket offers something for everyone in this compelling summer drama.

I did not think this book was as well-written as 28 Summers. I agree with another reviewer that the far-fetched, and I will add predictable, plot were not impressive. An OK summer read, but would not recommend. Narrator mispronounced names of colleges.

Enjoyed but should have had more of the ghost part of the story.

I gave this a 3 star because It was an okay audiobook, but I could not stand 2 things about this book. Her need to repeatedly reference the sign in her bedroom about moving on and even WORSE her reading out those dumb playlist….singer / song blah blah blah not once that was bad enough….but THREE TIMES! NOT NECESSARY AT ALL! So annoying

Another great book - loved all of the characters !!!!

This was my favorite Hilderbrand since The Blue Bistro. It hit all the right notes. I really enjoyed the story, the characters and the narration. I would also very much love to stay at the Hotel Nantucket!

Enjoyed the story, buy the romance part, where the implication seem to be you must be in a relationship to be happy was disapppointing.

Surprised by the narrative reading of this book. Though the narrator was excellent, the “telling” of this story, rather than 1st person perspectives was surprising. I could only listen to about 45 minutes of it. A total disappointment. A wasted credit in my opinion!

Great book and loved the narrator! It was so easy to listen to and follow, great story lines. I needed a break from overwhelming drama and this had just enough “story” without being too intense. Loved it!

Typical writing for Elin and agree with several other reviewers about being far fetched. I enjoy her stories on Nantucket, it would be great for her to make more stories on other islands, like Bermuda, Cape Cod, British Virgin Islands, etc. I love when she has a mystery plot or a who done it!

This title is due for release on June 14, 2022
We'll send you an email as soon as it is available!