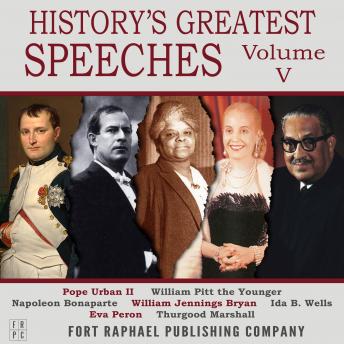 This is a SoundCraft Audiobooks production featuring digitally enhanced performances of some of history's greatest speeches - all presented as they might have originally been heard.

The immersive audio experience presented here - complete with sound effects, music, and atmospherics - allows the listener to feel as if they were in attendance when these speeches were first delivered. The orations are performed by a select group of amazing actors who uniquely capture the essence, power, and complexity of these magnificent addresses, universally acknowledged as some of the greatest speeches in world history.

Volume V features such disparate historical characters as Pope Urban II (Kevin Theis) urging the beginning of the Crusades, Prime Minister of England William Pitt the Younger (Nick Sandys) arguing against negotiations with Emperor Napoleon Bonaparte, the defeated Napoleon Bonaparte himself (Ben Werling), bidding farewell to his Old Guard as he steps down as Emperor of France, William Jennings Bryan's (Will Clinger) fiery 'Cross of Gold' speech, Ida B. Wells (Devereau Chumrau) speaking on the scourge of lynching in America, Eva Peron (Kelly Silva O'Rourke) stepping down as candidate for the Vice Presidency of Argentina and Thurgood Marshall (AK Murtada) delivering the closing argument in the landmark Supreme Court case of Brown v. Board of Education.

This collection is part five of a series. Search for 'History's Greatest Speeches' to discover more from SoundCraft Audiobooks and Fort Raphael Publishing.

This title is due for release on May 12, 2021
We'll send you an email as soon as it is available!