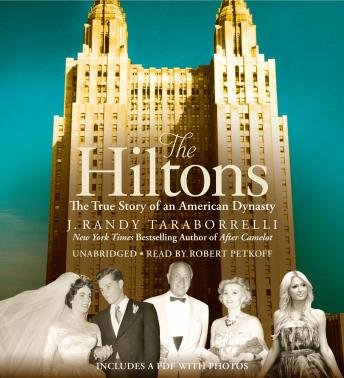 The Hiltons: The True Story of an American Dynasty

The Hiltons is a sweeping saga of the success-and excess-of an iconic American family.

Demanding and enigmatic, patriarch Conrad Hilton's visionary ideas and unyielding will established the model for the modern luxury hotel industry. But outside the boardroom, Conrad struggled with emotional detachment, failed marriages, and conflicted Catholicism. Then there were his children: Playboy Nicky Hilton's tragic alcoholism and marriage to Elizabeth Taylor was the stuff of tabloid legend. Barron Hilton, on the other hand, deftly handled his father's legacy, carrying the Hilton brand triumphantly into the new millennium.

Eric, raised apart from his older brothers, accepted his supporting role in the Hilton dynasty with calm and quiet-a stark contrast to the boys' much younger half-sister Francesca, whose battle for recognition led her into courtrooms and conflict. The cast of supporting players includes the inimitable Zsa Zsa Gabor, who was married to Conrad briefly and remained a thorn in his side for decades, and a host of other Hollywood and business luminaries with whom the Hiltons crossed paths and swords over the years.

Hiltons: The True Story of an American Dynasty

This title is due for release on April 1, 2014
We'll send you an email as soon as it is available!