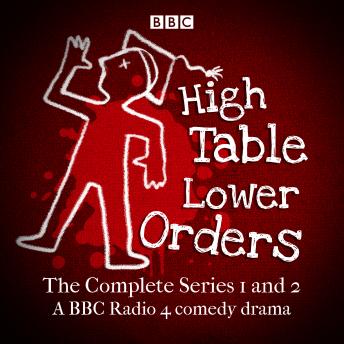 When prominent don and celebrity TV historian Peter Devanti dies after dining at High Table, his colleague Gilbert suspects foul play and invites his former student Simon Harrison, a disillusioned health and safety officer, to investigate. Meanwhile, Simon’s former girlfriend Zoe, a freelance journalist, arrives to write an article about Devanti’s death: reopening old wounds for Simon. After another college member dies, more skullduggery is uncovered, and Simon must find out which of the many suspects is a murderer – while also trying to get back with Zoe and keep his day job...

A year later, the college is recovering from the Devanti affair, but struggling for cash and riven by arguments between traditionalists and modernisers. Simon, now bereft of a job, jumps at the chance to become a don – but soon finds himself embarking on another murder investigation after a student is caught cheating and his accuser is found hanged. Can Simon unmask the killer before they strike again?

Written by Mark Tavener (In the Red, Absolute Power), this brilliant black comedy stars Geoffrey Palmer as Gilbert, Samuel West as Simon and Sharon Small as Zoe, with Rebecca Front as Patricia, Michelle Fairley as Roisin, Michael Maloney as the Dean and Jonathan Coy as Bernard.

This title is due for release on February 21, 2019
We'll send you an email as soon as it is available!