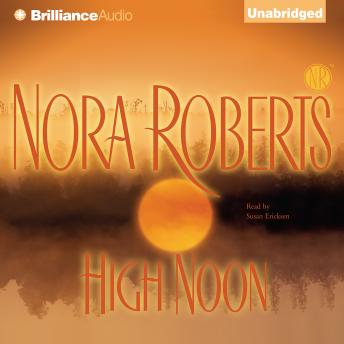 Phenomenal #1 New York Times bestselling author Nora Roberts presents a spine-tingling novel about a female cop who walks fearlessly into danger—but must draw on her courage to let love into her life.

Police Lieutenant Phoebe MacNamara found her calling at an early age when a violently unstable man broke into her family’s home, trapping and terrorizing them for hours. Now she’s Savannah’s top hostage negotiator, who puts her life on the line every day to diffuse powder-keg situations.

After watching her talk one of his employees off a roof ledge, Duncan Swift is committed to keeping this intriguing, take-charge woman in his life. Phoebe’s used to working solo, but she’s finding that no amount of negotiation can keep Duncan at arm’s length. Especially when a man throws a hood over Phoebe’s head and brutally assaults her—in her own precinct house—and threatening messages begin appearing on her doorstep. Duncan backs her up every step of the way, as she establishes contact with the faceless tormentor who is determined to make her a hostage to fear—before she becomes the final showdown.

suspense, romance, interesting twists. And read by the best narrator in the business, Susan Erickson.

Fantastic! Amazing!! One of the Best Books I have Ever Listened to! Such a eventful story. It will hold your attention and keep you wanting to hear/read more! Love love loved it!!! Thank you Nora Roberts for your ever changing imagination!!!! Narrator was best! I listen to all the books she reads. Can’t wait to listen to her again. She makes that characters so real.

I really enjoyed this book and have recommended it to my fellow readers. Nora Roberts built the characters throughout the story which was high action and suspenseful. I also enjoyed the Narration, Susan Erickson has a way of drawing the listener through her voice.

Excellent story full of suspense and intrigue! Nora Roberts had done it again! The narrator is amazing! So many different inflections for each character without sounding forced or cheesy. A highly recommended read or listen!

This was so bad I did not even get thu the 1st CD.. I could not stand the reader --he was that bad. Not worth renting -in my opinion. Not sure about story -didn't get that far

This book was amazing. One of the best audios that I have listened too. It caught my attention from the very beginning, and held it through the end. There were twists and turns that had me shocked and in tears at some points. I enjoy authors that can captivate my emotions like that. It is a must read/listen to story by Nora Roberts.

Absolutely wonderful! Great character development. The reader is great...accents, voices etc. I thoroughly enjoyed it and will take on some others by this author. I hope all the readers are this good.

This title is due for release on July 10, 2007
We'll send you an email as soon as it is available!