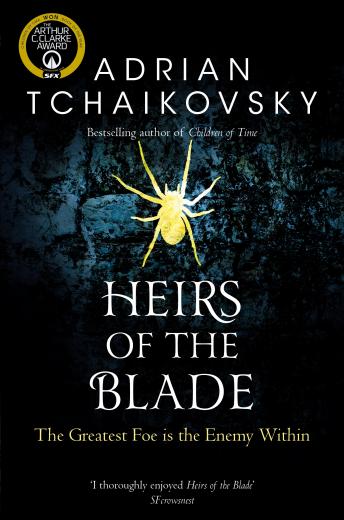 Heirs of the Blade

#7 of Shadows of the Apt

Heirs of the Blade is the seventh book in the critically acclaimed epic fantasy series Shadows of the Apt by Adrian Tchaikovsky.

The greatest foe is the enemy within . . .

Tynisa is on the run, but she cannot escape the demons of her own mind. Amidst the fragmenting provinces of the Dragonfly Commonweal, her past will at last catch up with her. Her father's ghost is hunting her down.

At the same time, the Wasp Empire seeks to conquer the city of Khanaphes, the fallen jewel of the ancient world. Whilst Empress Seda's soldiers seek only conquest and prestige, she sees herself as the heir to all the old powers of history, and has her eyes on a far greater prize.

Heirs of the Blade is followed by the eighth book in the Shadows of the Apt series, The Air War.