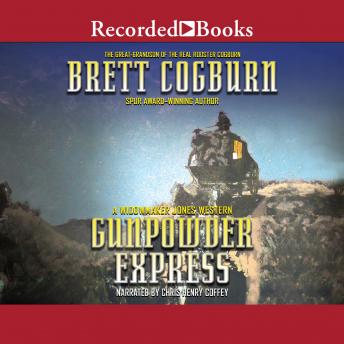 TIME TO MEET THE WIDOWMAKER Vulture City is home to a prosperous gold mine and every bad man in the Arizona Territory knows it. Nearly every stagecoach attempting to deliver the gold to the railroad at Maricopa has been ambushed on the trail-a trail known as the Gunpowder Express for the bullet-riddled bodies along the way. With gold piling up and a lack of volunteers to transport it, the mine owner hires Newt 'Widowmaker' Jones to ride shotgun on the next stage. Foolhardy and desperate for money, Newt joins three other guards-and a passenger, Jenny Silks, a stubborn firebrand with her own stake in seeing the delivery through. But waiting on the Gunpowder Express is Irish Jack O'Harrigan and his band of outlaws. There's not a soul alive he wouldn't think twice about putting six feet under. But he's never traded lead with the man known as Widowmaker . . .

This title is due for release on December 31, 2019
We'll send you an email as soon as it is available!