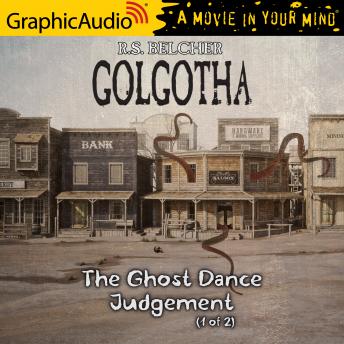 NEVADA, 1872. Out of the merciless 40-Mile Desert, a stranger appears in the town of Golgotha, home to the blessed and the damned. He carries with him an innocent victim of a horrible massacre and a dire warning for Sheriff Jon Highfather. The conflict between the Indian nations and Mormon settlers has been brewing for years, and now the spirits of the fallen Indian dead have begun to rise to join in the fight. Deputy Mutt's old nemesis, Snake-Man, returns to begin a final bloody war against the Whites, purging them from the land forever. An insane U.S. General with his own genocidal agenda sees the coming conflict as a perfect solution to the "Indian problem," and, as is often the case, the people of Golgotha find themselves caught in the middle. Mayor Harry Pratt's leadership of the town is challenged and he is threatened with the revelation of his greatest secrets, and with a betrayal that could utterly destroy him. The hungry, antediluvian terror imprisoned under the Argent Mine seeks release to devour the world through the most innocent of souls-Auggie Shultz and his wife, Gillian's, newborn. Not only is the fate of an innocent soul at stake, but the fate of all life. Performed by Eric Messner, Scott McCormick, Jacob Yeh, Kimberly Gilbert, Dave Jourdan, Evan Casey, Dani Stoller, Michael Gets, Rebecca Sheir, Joe Mallon, Zeke Alton, Andy Clemence, Chris Stinson, James Konicek, Lise Bruneau, Nanette Savard, Richard Rohan, Rob MacFadyen, Steven Carpenter, Tony Nam, Bill Gillett, Joel David Santner, Laura Harris, Matthew Pauli, Rana Kay, Terence Aselford, Yasmin Tuazon, Carolyn Kashner, John Kielty, Matt Bassett, Michael John Casey, Rose Supan, Shanta Parasuraman, Colleen Delany, Ken Jackson, Matt Schleigh, Nora Achrati, Nazia Chaudry, Bradley Smith and Karen Novack.